Each book in the Elite series focuses on a single army or elite unit, military tactics or a group of famous commanders. Military uniforms, insignia and equipment are shown in full color artwork. Elite Books cover the full spectrum of military history, examining the greatest armies, units and commanders of the ancient, medieval, Napoleonic, American Civil War, World War I and World War II. Featuring full specially commissioned color artworks of typical military uniforms and equipment, together with organizational diagrams and a wealth of black and white photography, these books provide an accessible resource for enthusiasts of all ages. 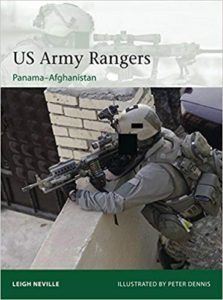 Leigh’s book outlines the service, deployments and general information on the US Army Ranger forces during the timeframe, 1989 through 2015, Panama to Afghanistan. The Rangers are part of the US Army’s Special Operations Command based out of Fort Bragg, North Carolina. They are a lethal, agile and flexible force, capable of conducting many complex, joint special operations missions. Today’s Ranger regiment is the Army’s premier direct-action raid force. Each of the four geographically dispersed Ranger battalions is always combat ready, mentally and physically tough, and prepared to fight our country’s adversaries. Their capabilities include conducting airborne and air assault operations, seizing key terrain such as airfields, destroying strategic facilities, and capturing or killing enemies of the nation. Rangers are capable of conducting squad through regimental-size operations and are resourced to maintain exceptional proficiency, experience and readiness. The regiment remains an all-volunteer force with an intensive screening and selection process followed by combat-focused training. Their locations are:

The Rangers are a few of the handful “go to” units that are always ready to deploy anywhere in the world at a moment’s notice. Their history is covered in glory. If you need an airfield seizure, a snatch mission, embassy defense, raid, any other direct action mission, this is the force you want to select. They have a no nonsense approach to their day to day business, physically and mentally fit, highly skilled and clearly in the elite class of modern warriors.

This book is unique because it identifies the typical US Army Ranger Battalion and small unit deployments from Panama in 1989 through Afghanistan 2015. The book provides specific mission information on the following; Operation Just Cause, Panama 1989, Operation Desert Storm 1991, Operation Gothic Serpent, 1993, Operation Enduring Freedom, 2001 to present day, And Operation Iraqi Freedom, 2003-2010. The book also has chapters dedicated to the evolution of the Ranger Regiment, a chapter on different weapons they have used over the years, and a chapter that speaks to the Ranger Training programs, RIP, and RASP.

This is a great reference book for any military historian and a must for the modern library.

Recognizing that I volunteered as a Ranger, fully knowing the hazards of my chosen profession, I will always endeavor to uphold the prestige, honor, and high esprit-de-corps of my Ranger Regiment.

Acknowledging the fact that a Ranger is a more elite Soldier who arrives at the cutting edge of battle by land, sea, or air, I accept the fact that as a Ranger my country expects me to move further, faster and fight harder than any other Soldier.

Never shall I fail my comrades. I will always keep myself mentally alert, physically strong, and morally straight and I will shoulder more than my share of the task, whatever it may be, one hundred percent and then some.

Gallantly will I show the world that I am a specially selected and well-trained Soldier. My courtesy to superior officers, neatness of dress, and care of equipment shall set the example for others to follow.

Energetically will I meet the enemies of my country. I shall defeat them on the field of battle for I am better trained and will fight with all my might. Surrender is not a Ranger word. I will never leave a fallen comrade to fall into the hands of the enemy and under no circumstances will I ever embarrass my country.

Readily will I display the intestinal fortitude required to fight on to the Ranger objective and complete the mission, though I be the lone survivor.

About the author: Leigh Neville is an Australian national who has written a number of books on both modern conventional military units and special operations forces serving in Afghanistan and Iraq, their weapons and their vehicles, including six titles for Osprey with several more in development. He has also consulted on military topics for several wargame companies and television documentary makers. He lives in Sydney with his wife and two dogs. He can be contacted via his website at www.leighneville.com.

This book is available on Amazon.com (US) and at Osprey Publishing.