Book Review of Wade McClusky and the Battle of Midway by author David Rigby. Published by Osprey Publishing. 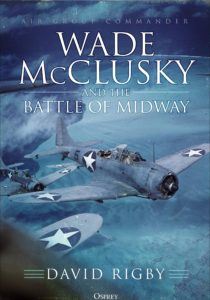 David Rigby’s “Wade McClusky and the Battle of Midway” is an exciting and thought-provoking telling of the role of Lieutenant Commander Wade McClusky in turning the Battle of Midway into a decisive victory for the United States in the Pacific during the Second World War. Rigby’s work highlights how McClusky vast experience as an aviator, combined with a thorough understanding of doctrine and an unflappable demeanor in the face of danger and uncertainty, resulted in a devastating blow to the Japanese carrier force and contributed immeasurably to the success of the American fleet. The book serves as a biography of McClusky but focuses heavily on his role at Midway, devoting seven of twenty chapters the role McClusky and his Air Group Six played in the battle. Rigby paints a vivid portrait of McClusky as a professional naval officer, pilot and combat leader.

Rigby’s best writing is found in the chapters detailing the American search for their adversary’s ships, and the dive bombing attacks on the Japanese aircraft carriers Kaga and Akagi. He clearly invested a great deal of time in primary source research and cites after-action reports, relevant orders, and doctrinal publications, as well as oral history interviews of the battle’s participants to create a vivid picture of the fight. Rigby additionally uses these sources to address a variety of controversies that emerged regarding McClusky’s role in the attack. Previous historians have accused McClusky of mishandling the assault and described him as being unprepared to lead dive bombers in combat. Rigby ably argues that, to the contrary, the sinking of Kaga and Akagi is directly attributable to McClusky’s experience and calm decision making. Details of McClusky’s early life and naval career prior to the Second World War are provided as context, and Rigby goes on to detail the remainder of McClusky’s wartime service and post-war career; however Midway is the focus and heart of the book. Readers interested in the Second World War, naval air operations, and leadership will not be disappointed. Rigby is an accomplished historian and author and he brings his considerable talent to bear in telling McClusky’s story.

“Wade McClusky and the Battle of Midway” is overall very well done. It contains comprehensive footnotes and an extensive bibliography. A selection of black and white photos compliments the text, and a small selection of relevant hand-drawn maps are included to assist in illustrating the attack on the Kaga and Akagi. The book is not merely for Second World War enthusiasts or naval warfare specialists. I recommend Rigby’s work to all readers interested in the story of an ordinary man doing his job under extraordinary circumstances.

This book is available on Amazon (US), Amazon (UK), and Osprey Publishing

1 thought on “REVIEW: Wade McClusky and the Battle of Midway by David Rigby”