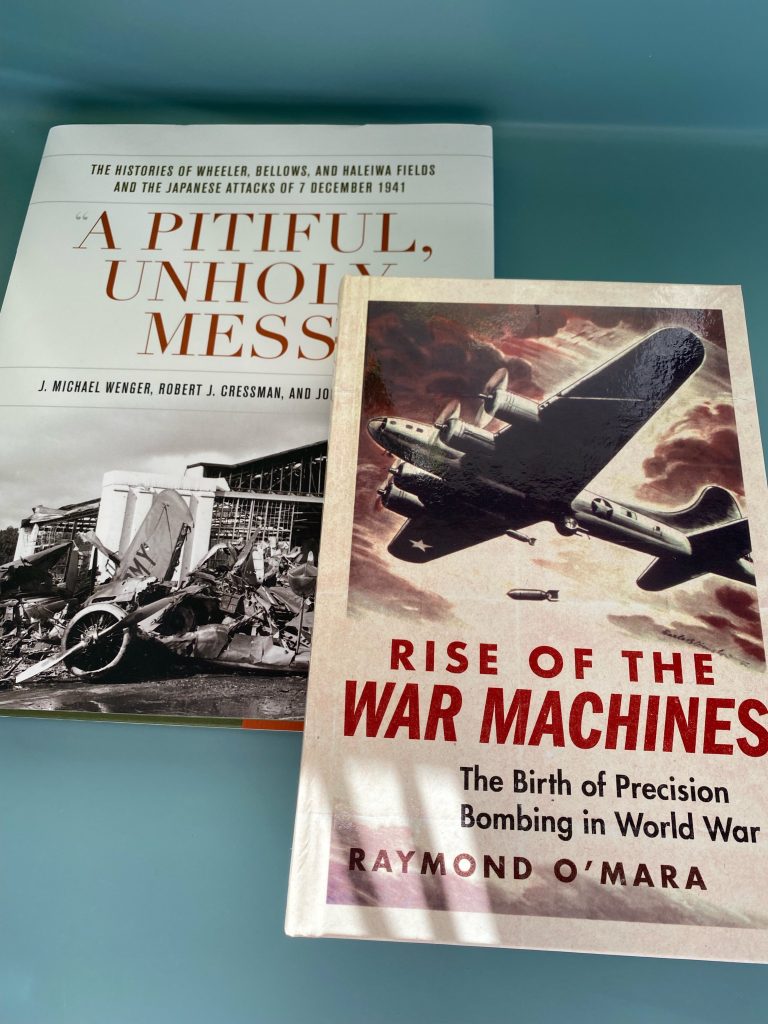 Being there . . . . on 7 December 1941 for the first several hours of the Pacific War’s 1,368 days
of bitter fighting. Watch the United States of America pass from precarious neutrality to full-
fledged belligerency. Samuel Eliot Morrison wrote in his nonpareil “History of United States
Operations in World War II – – Volume III, The Rising Sun in the Pacific, 1931 – April 1942”, page
101, “That morning, the Sabbath calm was rudely broken by bomb explosions, by the hoarse
klaxon sounding General Quarters on every vessel; by the sharp bark of 5-inch anti-aircraft guns
and the nervous chatter of machine guns. Colors were raised defiantly, and the Battle of Pearl
Harbor was on.” Captain Mitsuo Fuchida, senior commander of Attack Group One consisting of
190 “Kates”, “Vals”, and “Zekes”, all flown by the world’s best trained Naval carrier airman,
telegraphed Vice Admiral Chuichi Nagumo on his nearby carrier a prearranged coded victory
signal, “To, To, To”, or, “Tora”, “Tora”, “Tora”, decoded roughly as, ”The lightning tiger attack
was a successful victory” . . .
THANK YOU, NAVAL INSTITUTE PRESS, FOR THE BEST PACIFC WAR OF THE YEAR – –
A Splendid Christmas Gift for Your Military Sea Buff – Read for yourself before wrapping,
“A PITIFUL, UHOLY MESS”
War, in late 1941, hitherto confined to Europe and North Africa, became global with the
“dastardly” surprise attack by fully armed and mobilized Japan on a still almost completely
unarmed America. That morning, of that year, had been a dreadful disaster, not only for our
country, but also for our foremost ally, Great Britain, when earlier five of her capital ships, a
third of Britain’s Battle Fleet, was sunk within a fortnight. Following our catastrophe at Pearl,
both our commands in the western and south-west passed on to the Japanese enemy. A
terrible price had been paid for the British and American neglect and wishful thinking.
Suddenly, as other nations, i.e., the Dutch East Indies, Malaya, Siam, Burma, French Indochina,
coastal China, the Philippines in south-east Asia fell. The United States found itself in a “total
war”, fighting without much resistance, especially in sea and air power.
Reviewed and Highly Recommended by Don DeNevi
“A PITIFUL, UNHOLY MESS – – The Histories of Wheeler, Bellows, and Haleiwa Fields and the
Japanese Attacks of 7 December 1942”, by J. Michael Wenger, Robert J. Cressman, and John F.
Di Virgilio. Naval Institute Press: Pearl Harbor Tactical Series, 2022, 338 pages, 8 1/2”x 10 7/8”,
hc; $44.95, Holiday price, $22.48. Visit, www.nip.org.
Although America’s entry into the Pacific War immeasurably guaranteed ultimate Allied
victory, that morning of fateful 7 December, “the day in American history that would forever
live in infamy”, General MacArthur’s bombers and fighters were being mowed down on Clark,
Wheeler, Bellows, and Haleiwa Airfields, while seven out of America’s nine battleships in Pearl
Harbor, or nearly half of our capital ships, were sinking, or put out of action. All hope for an
immediate American, or Allied, counterattack was gone. Simply put, we had lost the
magnificent Pacific Ocean to an implacable enemy.

“A PITIFUL, UNHOLY MESS” is a superb, detailed combat narrative of that debacle on the
O’ahu’s main airports. Since these bases comprised Hawaii’s defenses, the Japanese needed to
neutralize them, especially Wheeler to prevent our boys, even with outdated aircraft, from
interfering with their attacks on the Pacific Fleet still at anchor. Of course, the losses, human
and material, were far less than those suffered by the fleet, although the aerial surprise attacks
caused chaos, destruction, and mayhem that proved both disastrous and wrenching.
Author-historians Wenger, Cressman, and Di Virgilio, each an exceptional writer guaranteed
to be heard from in the decades ahead, focus on descriptions of actions in the air and on the
ground at the deepest tactical level, from both the U.S. and Japanese perspectives. No Pacific
War book this reviewer is aware of has studied such perspectives simultaneously before,
especially when the combatants were an ocean apart. Such a complex synthesis is possible only
by the dogged pursuit of EVERY source of American of documents, reminiscences, interviews,
and collections of rare personality photos. Similarly, the authors sought out Japanese accounts
and photography of the attack, many of which appear here in print for the first time. The
serious buff will appreciate that much of information from the reports of the Japanese air
groups are from the aircraft carrier Shokaku which have never been used before. On a personal
note, “Hey, guys, this still-hopeful-wanna-be writer, non-fiction and fiction, has the greatest
respect for your team effort – usually a trio winds up fist cuffing. Really, yours is a model, an
exemplary masterpiece of tackling an obvious complex subject, Hawaii’s three main military
airfields all at once bombarded, and, 83 years later, provide knowledge and new insights
hitherto unavailable.” Loyal readers, please excuse the sudden blunt show of emotion. Yet,
Wenger, Cressman, and Di Virgilio should be singled out for what they are all about to us.
“RISE OF THE WAR MACHINES – The Birth of Precision Bombing in World War II”, by Raymond
O’Mara. Naval Institute Press: History of Military Aviation Series, 2022, 6” x 9”, 338 pages, hc;
$49.95, Holiday price, $24.98. Visit, www.usni.org, the eBook edition is also available.
Another brilliant study – examining the rise of autonomy in air warfare from the inception of
powerful flight through the first phase of the Combined Bomber Offensive in World War II.
Author O’Mara builds a conceptual model of humans, machines, and doctrine that
demonstrates a distinctly new way of waging warfare in human-machine teams. Specifically, he
presents how the U.S. Army’s quest to control the complex technological and doctrinal system
necessary to execute the strategic bombing mission led to the development of automation in
warfare.
O’Mara, a retired Air Force colonel who flew the F-15 in operations and operational test
assignments, further explores how the process of sharing both physical and cognitive control of
the precision-bombing system established distinct human-machine teams with complex
human-to-human and human-to-machine social relationships. He presents the precision-
bombing system as markedly socio-technical, constructed of interdependent, specially trained
roles; purpose-built automated machines; and the high-altitude, daylight bombing doctrine, all
of which mutually shaped each other’s creation and use.