Maarten Otte’s book covers the story of the American Participation in the World War One Saint Mihiel Offensive.  The Americans entered the war late and although unproven in battle they quickly became a formidable force in their own right. With Pershing leading the American Forces he negotiated with the Allies to ensure he commanded his own troops so that they were not aligned another a different commander. Mainly because he didn’t believe they would fight well under a European Commander but also because they had yet to prove themselves on the field of battle. 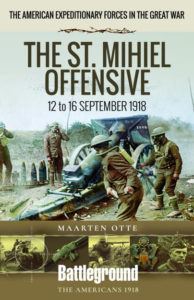 Throughout the book Maarten covers each and every American Division that participated in the War in a chronological fashion. These short histories are followed by notes for walking or car tours of the battlefield. In the first part of the book the author focuses on General Pershing the American Expeditionary Force Commander, and his work with the French Commander General Foch to ensure that the American forces were committed to the Meuse Argonne Area. Both agreed that there would have to be a tight timetable of events, 16-19 September. It was also considered the largest allied offensive since the opening battles in 1914 in terms of manpower, deployment of aircraft, and tanks. As the author reports, there were problems with communications up and down the line and this was compounded with the fact that the Germans were conducting a scorched earth policy in retrograde operations. Some European historians claim that the only reason for such an American success was that the Germans had planned to withdraw from that area beforehand and this two pronged attacked hurried along that decision. Regardless of the German intent the Americans were successful in pushing the Germans from the battlefield while suffering very few losses and inflicting thousands of casualties on the German Forces. It kind of begs the question; If the Germans were indeed anxious to withdraw, why would they deliberately leave their troops in harms way and incur such a defeat when they could have easily pulled out and abandoned the area! The closing of this salient moved the Allies closer to the strategic objective of Metz which was a key hub of rail and transportation in general.

A great point that the author makes should be highlighted here. The French contribution to the overall effort was enormous. Not only did the French put over 100,000 soldiers under American Command but they also provided weapons, artillery, ammunition, mortars, airplanes, and tanks. All manufactured by the French!

About the author; Maarten Otte is a long time resident of the Argonne, whose home is in Nantillois, situated between Montfaucon and Romagne. Growing up in the Netherlands with a fascination with the Great War, some eight years ago he settled in the Argonne, where he has developed his interest in the war, particularly the role of the United States. He has published books on Nantillois in 1918 and on US Medal of Honor winners. He now splits his time between writing on the war, conducting guided tours and assisting his wife in running their B&B in Nantillois.