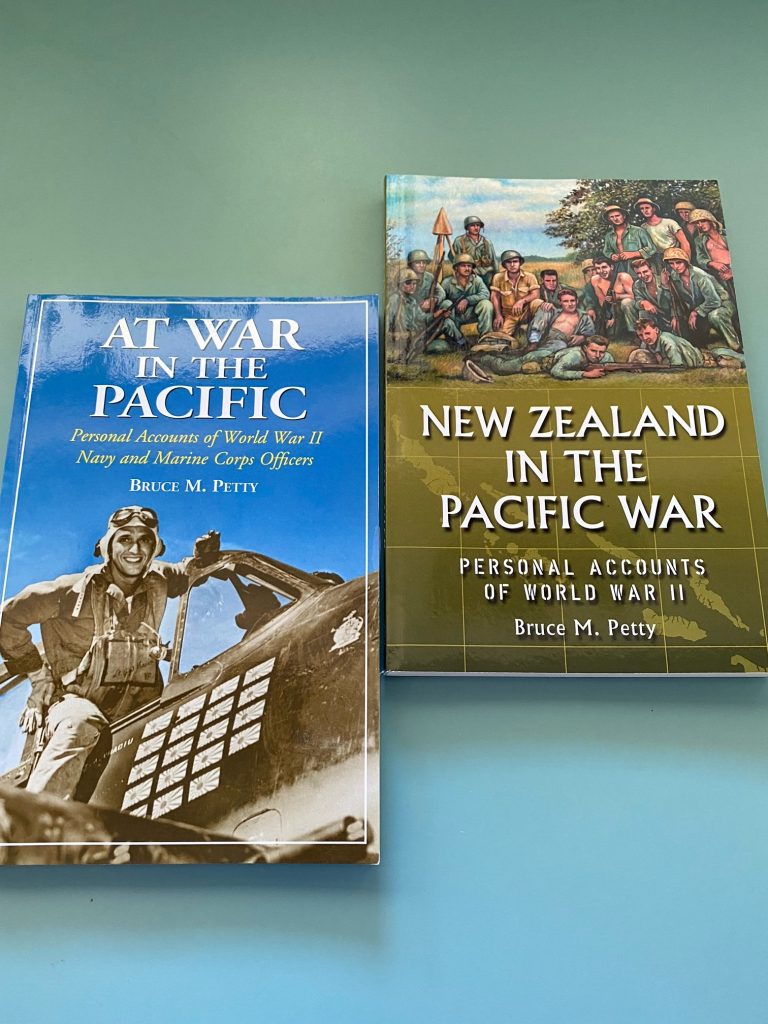 Being there . . . .in 2002 when author-anthologist Bruce M. Petty began recording an amazing  collection of choice World War II combat reminiscences for a trilogy unsurpassed to this day. All told, more than a hundred interviews were collected over the span of a decade to allow us buffs, enthusiasts, and living-room-armchair historians to relive in serviceman verse and prose battle experiences otherwise unavailable after eight decades . . . .

Meeting the military miens of Marines, officers, and their men, in often unforgiving, fathomless milieus, to read the actual words of eyewitnesses is rare. Thanks to the genius of the McFarland Publishing Company editorial staff, we, too, suddenly find ourselves at war in New Georgia, Betio, Tarawa, Bougainville, New Britain, Rabaul, the Marshalls, the entire Central Pacific, while Nimitz holds confabs, Macarthur leapfrogs islands, the two together plan pre-invasion softening’s, while the oral participants fly over the Marianas, lead Task Force 58, guide Burma, fly the B-29 raids, visit the cemeteries throughout the South Pacific, watch the Navy Hellcats roar off the decks of carriers, fight on Saipan, Tinian, and Okinawa, and, of course, Iwo, then welcome the Bomb, and finally accept the surrender of all Japanese forces throughout the Pacific – – if not recorded and found among these oral accounts of those there or nearby , then look among the carefully read and recommended books in each of Bruce’s three Selected Bibliographies. A serious question, reader. Do you earnestly, sincerely want to be there? If so, a must-read trilogy awaits . . .

MIGHTY MCFARLAND REISSUES LONG-FORGOTTEN, RIVETING TRILOGY OF THE U.S.A. AT WAR IN THE PACIFIC – THE PERSONAL ORAL ACCOUNTS OF NAVY AND MARINE CORPS TROOPS AND OFFICERS

Each of the three oral volumes attempts to gather the most significant, easily understood, and authenticated images of the Pacific War. Bruce, with guidance from McFarland staff, worked hard, as authors and editors always have together, in determining the best among the thousands, literally hundreds of thousands, of potential recollections and memoir chapter segments that portray American men in battle. And, although all are individually good and worth reading, the most vivid, those truly capable of placing the reader at the foot of action, probably number in the hundreds. Unfortunately, “most of those may be scattered in the Pacific sands and coral”.

The compiled individual interviews, numbering almost 20, that record the invasion of the Marianas Islands – Saipan, Guam, and Tinian, that our strategists expected to be a relatively easy invasion and fight – turned out to be unremitting terror. Taking Saipan required three weeks of nearly continuous fighting before the 105th Infantry beat back and defeated an overwhelming Japanese banzai on July 7, 1944. Half of our 900 casualties were killed in action. One can only imagine the oral recollections of those who survived.

In “AT WAR IN THE PACIFIC”, we read, “I was standing behind a metal plate behind the pilot when the nose, waist and tail gunners started firing on the ships. I looked down at the cocker spaniel next to Lieutenant Elder and saw him put both paws over his ears. It was then that I felt I was in a situation I hadn’t really bargained for . . . All I could think of at that moment was, ‘Nobody knows where I am.’ The captain of my ship was unaware that I was on this mission. There was my poor mother with my brother a POW in Germany.”

All the oral interviews relate such experiences, most of which would surprise, frighten, inspire, and perhaps later in life haunt even the Marines and Navy men made of solid lead.

“NEW ZEALAND IN THE PACFIC WAR” focuses on New Zealand’s often overlooked war contribution and new relationship with America: i.e., New Zealand’s war veterans, New Zealanders on the home front, and American servicemen stationed on the island nation before and during the war. Four of the interviews deal with adults born because of American soldiers – New Zealand women love affairs in their own words shed light on this sometimes-uncomfortable aspect of all foreign wars. Photographs and short biographies of the interviewees round out this superb anthologies.