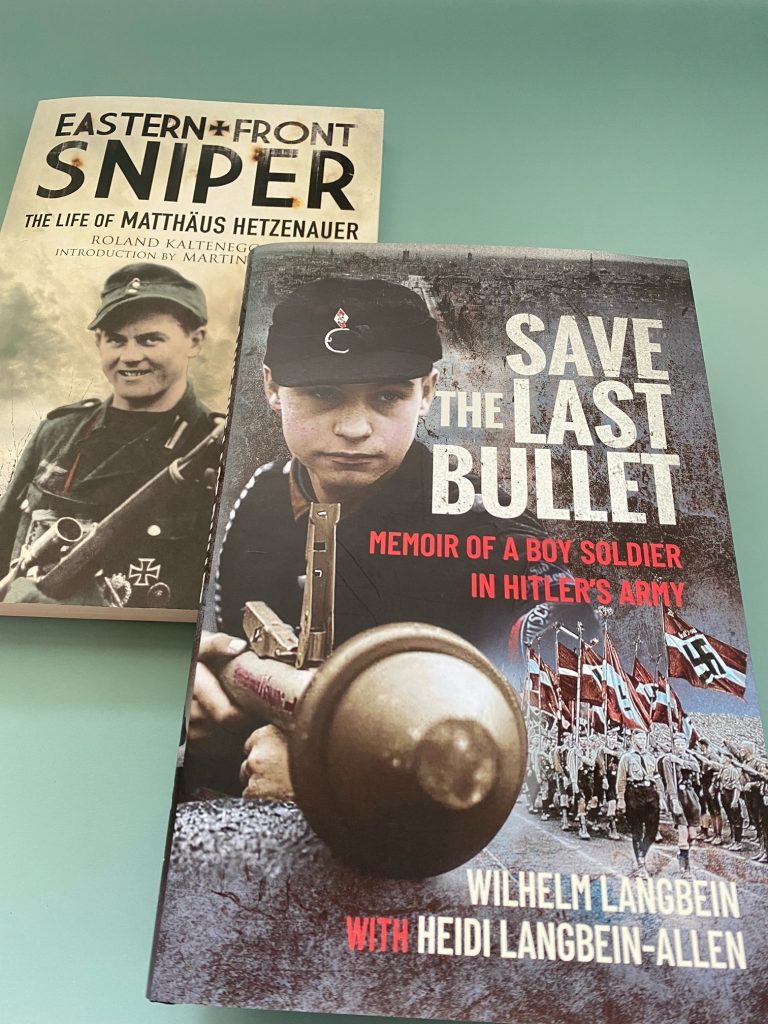 Being there . . . . in August 1944, watching Der Fuhrer, usually remarkably patient although
known among his coterie of sycophants to be a man of unpredictable volatile temperament,
order Josef Goebbels, chief sycophant of the Third Reich’s sycophants, to mobilize Germany’s
last resource, teenage boys to fill the ranks of his dwindling Armed Forces. That year, In France
and the West alone, Hitler counted losses of over a million troops. In October, Goebbels
ordered ALL remaining able-bodied men aged between 16 and 60 to join a home guard force to
be named the Volkssturm, the People’s Guard . . . .
CASEMATE PUBLISHERS OFFERS TWO NEW BOOKS OF WHAT IT WAS LIKE FOR YOUNG
TEENAGE BOYS TO FIGHT AND DIE FOR HITLER IN THE FINAL MONTHS OF WORLD WAR II
“As the Allies drew in on German territory in early 1945, it was this undertrained, ill-
equipped force that bore the burden of much of the final fighting. In fact, many members were
over 60 and others were boys as young as 11 and 12. Many, not all, of the youngsters were in
the Hitler Youth and had known nothing but Hitler’s rule during their short lives. Their
fanaticism rivalled that of the most hardened SS men. The Allied troops fighting against these
youths were tempted to treat them like naughty schoolboys – – but a rifle or submarine gun was
just as lethal in the hands of kids as in those of a fully grown man . . .”
“The World at Arms – The Reader’s Digest Illustrated History of World War II”, 1989, page 408.
Reviewed and highly recommended by Don DeNevi
“SAVE THE LAST BULLET – Memoir o f A Boy Soldier in Hitler’s Army”, by Wilhelm Langbein with
Heidi Langbein-Allen. Pen & Sword MILITARY, dist. by CASEMATE PUBLISHERS: 2022, 202 pages,
hc; $32.95. Visit, www.penandswordbooks.com, or E-mail, Uspen-and-
[email protected]
James McMurtry Longo, author of the highly acknowledged and respected, “HITLER and the
HABSBURGS — The Fuhrer’s Vendetta Against the Austrian Royals”, praised it best, “ ‘SAVE the
LAST BULLET’ is a true story of a German boy-soldier coming of age at the apocalyptic end of
World War II. In the powerful tradition of ‘THE RED BADGE of COURAGE’ and ‘ALL IS QUIET ON
THE WESTERN FRONT’, the book will haunt and inspire. Fast paced, frightening, and heart
pounding, beautifully written, an unforgettable read.”
The kid was just 13 when Hitler had Goebbels “pound” on the Langheim front door and
confiscate Willi under the lie of protecting him. Their real reason was to use the boy, along with
his school chums, to destroy oncoming Soviet T-34s, whether these “tank killers” survived
behind a barricade or charging forth, each with a single shot, rocket-launched Panzerfaust.
Against all odds, Willi and schoolmates, then all 14, were under strict orders to stave off the
crushing Russians rolling toward Berlin. Crying was absolutely forbidden.
Willi and a few others returned home from Russian captivity free men to find everything
utterly demolished. Numb, confused, and concerned, he was mandated to serve one year of
forced German farm labor. Gradually, he realized his entire life, hopes, and dreams had been

destroyed by cruel Nazi lies. Thanks to a kind, caring British trooper, the boy-soldier now a
maturing teenager began to heal.
Willi’s graphic and emotionally moving story is told from a Nazi-ordered perspective until
back home helping Germany rebuild. It is not only an amazing and inspiring war account of a kid
in battle, but also a happy postwar story of resoluteness and determination fulfilling his dream
of a married life, children (two daughters), and professional life as a lawyer. In 1979, Willi was
awarded the medal of European Merit for his contribution to the advancement of democracy in
Europe. He passed away in 2018, leaving daughter, Heidi Langbein-Allen. Willi lived for 88
years.
In “EASTERN FRONT SNIPER – The Life of Matthaus Hetzenauer”, by Roland Kaltenegger,
Introduction by Martin Pegler. Greenhill SNIPER Library Books/Pen& Sword: 148 pages, sc;
$22.95. Visit, www.greenhillbooks.com. Or, [email protected]
Serious WWII buffs, especially those intrigued with the minutia of successful Wehrmacht
combat battle strategies, sniper training techniques, a 3 rd Mountain Division unit’s defeats,
Soviet captivity, and homecoming, will be thoroughly mesmerized, nay, riveted, to this well-
written biography of one of the war’s three highest-scoring snipers from both the Allied and
enemy sides.
Consider for a moment the much sought-after German military decoration, the Iron Cross
awarded in eight classes. The first, the Great Cross of the Iron Cross was awarded only to Field
Marshal Hermann Goring, leaving seven. Young Matthaus Hetzenauer won all seven. See the
loyal sniper warrior wearing them on page 61. His other badges, orders and decorations are too
numerous to be listed here. Suffice enough, potential book buying-reader, or Christmas gift-
giver (if so, read the book before wrapping!), to describe who Matthaus was by quoting two
sentences from his superior’s recommendation for his final Iron Cross 17 days before the end of
the war in Europe in early May of 1945, “Gefreiter Hetzenauer has distinguished himself as a
sniper by especially outstanding dynamism and dare-devil aggression. Hetzenauer fights with
unparalleled bravery, tirelessly and without regard to the constant danger to his life and is
known throughout the division for his fearless adventures as a lone soldier.”
Read back-to-back, as the Greenhill/Pen & Sword editors intended, and Casemate
distributors hoped, the two provide unparalleled views of enemy youth coming of age quickly
under intense fire. Rarely are such reads of two brother-combatants combined and offered as
one – teenagers believing early on all the Nazi ideology of the late 1930’s and early 1940s.