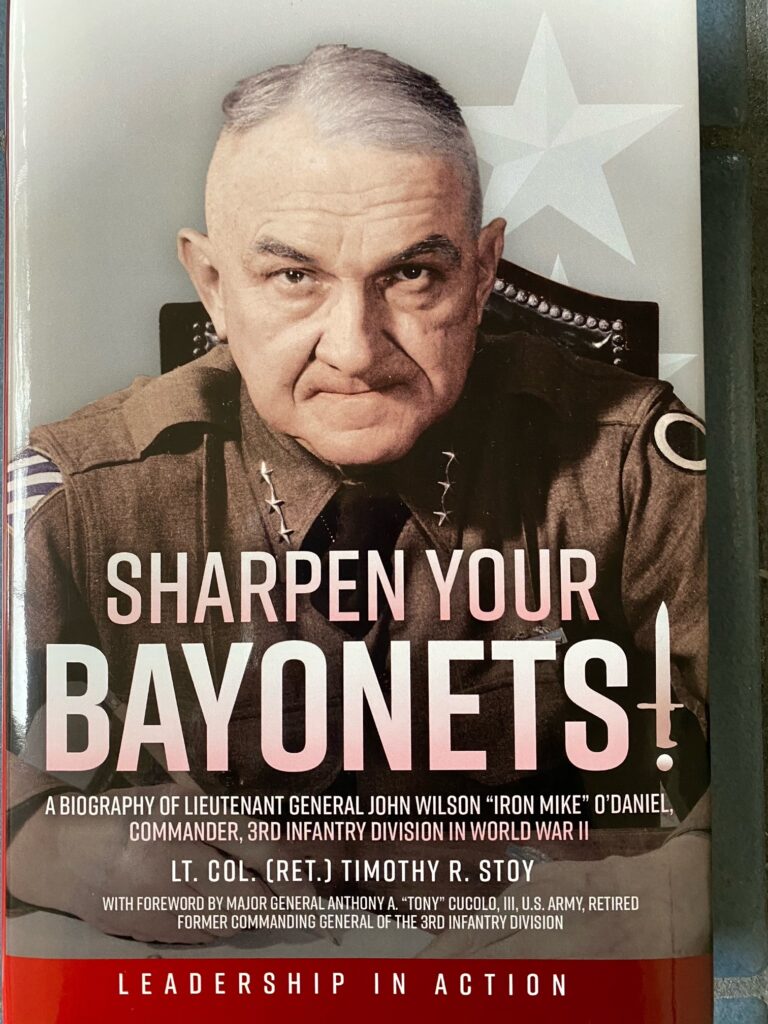 Being there . . . . to meet a general who began his military career with the Delaware Militia in
1914, served on the Mexican border in 1916, received a Distinguished Service Cross in World
War I, and, in World War II, was General Mark Clark’s man for hard jobs in the early day of
those battles, winding up commanding the storied 3 rd Infantry Division from the Battle of Anzio
until the surrender of Germany, then ending his war duties in Salzburg after liberating
Nuremberg, Augsburg, Munich, and Hitler’s Berghof and Eagles’ Nest on the Obersalzberg.
Meet this same general who virtually all his contemporaries and subordinates, military men and
women, considered unusually tough, arrogant, accusatory, hard on himself and staff, an officer
who never excused excuses, a man with a huge and terrifying lung capacity when shouting
orders, demands, and reprimands, who ALWAYS refused to tell his troops they did well, who
everyone believed spoke only in snaps and barks, who openly ordered, “God damn it, when I
order you to do something, do it more, do it better than I’ve envisioned it can be done. I want
more and more out you because NOTHING satisfies me!”. On the other hand, be there to greet
John Wilson “Iron Mike” O’Daniel who President Dwight D. Eisenhower wrote in his presidential
memoir, “One of our most outstanding combat soldier-generals. Despite his nickname and
tough exterior, John was an officer and man of great compassions for his troops, great ability in
strategizing, and capable of enthusing gentleness and personal tact. At military parades, or
visiting wounded soldiers and fellow officers in hospitals, and dealing with the home problems
of his troops, he was unable to hide a shed tear or two.” Indeed, meet this unusual man, this
fine general almost all superiors, and certainly family members, including authors Lt. Col. (Ret.)
Timothy R. Stoy and Major General Anthony A. “Tony” Cucolo, III, U.S. Army, Retired, former
Commanding General of the 3 rd Infantry Division, agreed was comparable to British Prime
Minister Winston Churchill in virtues as a war leader – the higher the tide the enemy rose, the
higher rose his courage. His nerves never failed, and the worst of disasters left his sleep and
appetite unimpaired. He foresaw dangers and opportunities others missed or were too
cowardly to test. Throughout WWII, he was a spur in the flanks of every military and civil
commander in each country he led his men through to destroy the Third Reich and all its
leaders . . . .
RECAPTURING THE COURAGE, HONOR, AND SOUL OF NONPAREIL GENERAL JOHN “IRON MIKE”
O’DANIEL IN AN IMPRESSIVE, WELL RESEARCHED, SUPERBLY NARRATED BIOGRAPHY CERTAIN
TO BE ACCLAIMED A MAJOR REFERENCE ADDITION TO THE MILITARY LIBRARIES OF THE
WORLD, AS WELL AS THE HOME LIBRARIESOF WORLD WAR II STUDENTS ACROSS AMERICA. . . .
Reviewed and highly recommended by Don DeNevi
“SHARPEN YOUR BAYONETS! – A Biography of Lieutenant General John Wilson “Iron Mike”
O’Daniel, Commander, 3 rd Infantry Division in World War II”, by Lt. Col. (Ret.) Timothy R. Stoy,
With A Foreword by Major General Anthony A. “Tony” Cucolo, III, U.S. Army, Ret., Former
Commanding General of the 3 rd Infantry Division. Casemate Publishing, Leadership in
Action/Biography Series in Conjunction with An AUSA BOOK, Association of the United States
Army: 2022, 286 pages, 6 1/4” x 9 ¼”, $37.95. Visit, www.casematepublishers.com.

Although more than half of the pages in “SHARPEN YOUR BAYNETS” focus on the general’s
early years and WWII assignments and victories, author Stoy brilliantly chronicles “Iron Mike’s”
command of 1 Corps in Korea, 1951 – 1952, then details closing out his career as the Chief of
the Military Assistance Advisory Group in Vietnam in the early days of our involvement there.
Lt. Col. Stoy provides readers, ordinary buffs as much as military bibliophiles, precisely what
this column strives for – – the closest “being there” experience possible as we approach a
century later. Warts and all, we are introduced to the very essence of the man, a complete
American warrior, one who spent more time under fire with his front-line troops than behind
the safety of his office desk, a man who prided himself completing “grandpa duties” as much as
a crusading anti-Communist, especially after serving in Moscow as Military Attache between
1948 – 1950 when the cold war intensified. Especially revealing are Chapters 11 and 12, as well
as Appendices 5 and 6, “The My Lai Affair”, and “What I Think of Ngo Dinh Diem”. Especially
heartfelt and endearing is Appendix 7, “CINCPAC Message to ASST SECDEF on O’DANIEL DSM”.
It also should be noted that even high Russian military officers quietly smiled and forgave him
with, “No comments”, when asked what they thought of Mike’s statement after spending three
days and nights in Stalingrad while serving in Moscow. He casually mentioned that had his
American Corps with its customary artillery been assigned the task of taking Stalingrad in 1942,
his troops would have taken it in less than three days. Even this reviewer forgives him for such
an occasional absurdity.
Thanks, Lt. Col. Stoy, for ensuring that Mike’s memory, nay, legacy, lives on. Without your
informative biography who would have written about, let alone remembered, John? To all who
worked with him, John will always be remembered as an ebullient piece of the sun, (5’6””),
tough, resembling and behaving as a bull, a man with a booming parade-ground voice. After
WWII, he was pretty much destined for a tiny spot on a growing pile of dust filling a corner of
World War II history. He died of heart issues on 27 March 1975 at the age of 81.