Siegfried Jamrowski, born on the 1st of November 1917 in Angerapp/ Ostpreussen. Jamrowski fulfilled his RAD service in the Reichsarbeidsdienst from April till October 1936 in Goldap. On the first of October 1936 he joined the Army, serving in the I. Bataillon/ Infanterie-Regiment 2 in Ortelsburg. Left the Army on the 25th of October 1938 as Feldwebel and Reserve-Soldat and began a degree in forestry. During the mobilization on 20 August 1939 he was called up and came back to Infanterie-Regiment 2. On 17th of October 1939 he became an instructor for Austrian officer candidates at the Infanterie-Schule Döberitz.

In February 1940 he became a Rekruten-Ausbilder in Infanterie-Ersatz-Bataillon 2 in Allenstein. At the same time he was promoted to Leutnant. In July 1940 he attended a Fallschirmschützen-Lehrgang in Wittstock and became on 1 September 1940 Zugführer in the 8. Kompanie/ Fallschirmjäger-Regiment 3. 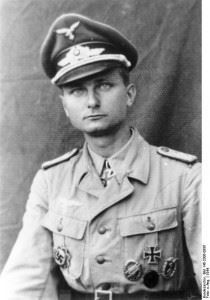 Promoted to Oberleutnant on 1 April 1942 and appointed as Adjutant of the IV. Bataillon/ Fallschirmjäger-Regiment 3.  Oblt. Jamrowski became a Zugfüher again on the 1st of June 1942 in the 6. Kompanie. For the success of his company during the Battle for Monte Cassino, he was awarded the Ritterkreuz des Eisernen Kreuzes on 9 June 1944.

Awards and Decorations of Siegfried Jamrowski.