The Defense POW/MIA Accounting Agency (DPAA) announced today that the remains of a U.S. serviceman, missing from the Vietnam War, have been identified and will be returned to his family for burial with full military honors.

Army Sgt. 1st Class Alan L. Boyer, 22, of Chicago, will be buried June 22 in Arlington National Cemetery, near Washington, D.C. On March 28, 1968, Boyer was a member of Spike Team Asp, an 11-man reconnaissance team assigned to Military Assistance Command, Vietnam – Studies and Observations Group (MACV-SOG), conducting a classified reconnaissance mission in Savannakhet Province, Laos, when they were attacked by enemy forces and requested extraction. Due to the rugged terrain, the U.S. Air Force CH-3 extraction helicopter was forced to use a ladder in an attempt to recover the team.

The helicopter came under heavy fire, and after recovering seven of the Vietnamese team members, began pulling away. Reports indicated that Boyer began climbing the ladder, which broke as the helicopter pulled away, sending him falling to the ground. The other two Americans on the team and the remaining Vietnamese commando, while at one point were last seen on the ground, may also have started climbing the ladder when it broke. On April 1, 1968, a search team was inserted into the area, but found no evidence of the missing team members. 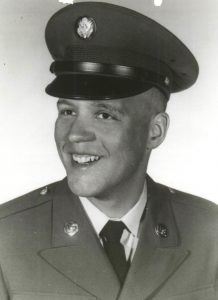 On Oct. 30, 1992, a joint U.S./Lao People’s Democratic Republic team traveled to Savannakhet Province to investigate the case. Two local Laotians reported seeing three men fall from a helicopter in 1968 when the rope ladder broke as they were climbing. The Laotians reported that local militia buried the bodies in graves near where they were found, but the men were unable to pinpoint a specific location.

The Defense POW/Missing Personnel office received remains from an American citizen who claimed to have received them from several unnamed Lao emigres. One of the remains was determined to be that of Boyer. To identify Boyer’s remains, scientists from DPAA and the Armed Forces DNA Identification Laboratory used mitochondrial DNA analysis, which matched his mother and sister.

Today there are 1,618 American service members still unaccounted for from the Vietnam War.