For the past quarter of a century Sailors who served aboard the USS Manatee (AO 58) have been holding reunions in various parts of the United States. The object was to have interesting things to do and places to visit in these diverse locations. Important over the years also was the camaraderie with others who served on the ship in various time periods.

The fleet oiler, active in World War II and the Korean and Vietnam conflicts, was decommissioned in 1973. So, these days those who served aboard are mostly retired. Because of this they are not pressed for time when they gather in a hospitality room and reminisce their days aboard ship. Here and there someone comes up with a good sea story. But then trying to pin a date on the event is a challenge. Was this in August or January? Did this happen in 1968 or 1970? Does anyone remember the person’s name that did this? 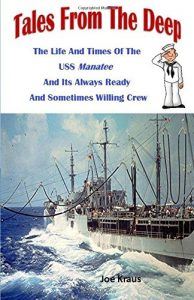 Ask Joe Kraus, a Manatee veteran and Stockton, California author of the new book, Tales from the Deep, what this ‘trying to remember activity’ was like and he’ll have one word for it — “exasperating.”

Kraus took it upon himself to write a history of sorts, starting from the ship’s inception in the middle of World War II. It was to end with the ship’s decommissioning after the Vietnam conflict. In between all those historic scrapes and near death experiences were to be all those   adventurous, and mostly humorous, sea stories. Problem was few could remember them.

“The interviewing took more time than anticipated,” Kraus said. “As a result, it dragged on for more than one reunion, in this case eight of them. Even letters and phone calls in between gatherings didn’t help much. Not only did fellow shipmates forget dates and locations, but they forgot whole incidents along the way. They forgot their friends’ names. They forgot what they ate in the mess hall, even what books they read, if any.”

In the end the book did manage to include stories of the ship’s several collisions at sea, a run-in with a sitting President, an encounter with Elvis Presley and a stow-a-way chicken from Knots Berry Farm. There was a major typhoon that nearly killed everyone on board. There was a fire, a ship’s worst nightmare.  The Manatee was even an eye witness to a hydrogen bomb blast that wiped out an entire Pacific island. And, would you believe it, it even had Hollywood calling. But most of all, there was the fact that the Manatee was the target that could have started the Vietnam War. Military history, in fact, would have been re-written if two U. S. destroyers hadn’t gotten in the way.

Historic events, in fact, were going on all around these Manatee sailors. And while officially, the Navy’s records had all the details down, with crewmembers it was a different story. While some Sailors remembered a few occurrences, others couldn’t piece together the whole picture. Reason was is that they didn’t record these incidents at the time. No one, including the book’s author, was keeping a diary or making journal entries. In hindsight it was the most important regret everyone had. At the time they didn’t think that those years in the service would be among the most memorable in their lifetimes.

All those science books tell us that memory is the process in which information is encoded, stored, and retrieved. But there’s a catch. As you read further there is another entry: Memories degrade with the passing of time.

So, these days Manatee shipmates, like everyone else their age, tend to lose their car keys, forget where they left their hat and even what they ate for breakfast. As one Sailor said, “thank God for those calendars and appointment books. Otherwise we’d forget the wife’s birthday, our wedding anniversary, even that appointment at the cardiologist.”

In the end, the finished book, Tales from the Deep, sub-titled, The Life and Times of the USS Manatee and its Always Ready and Sometimes Willing Crew, did make it to the publishers. It’s currently available on Amazon.com, Barnes and Noble and most major book stores. It is the second book, by its author, a retired daily newspaper editor. That first book, Alive in the Desert, is being updated and re-issued in August under the title, Staying Alive in the Desert: The Complete Guide to Desert Survival in 2017 and beyond.