Would the history of the twentieth century have taken a different turn if the World War I Battle of Tannenberg had ended in a Russian victory rather than defeat? When the war began, the expectation was that Russia, with the world’s largest standing army, would be a major force for the Allied Powers. Russia was able to mobilize over five million troops, not to mention 360 aircraft, along the Eastern Front’s almost 1,000 miles from the Baltic Sea in the north to the Black Sea in the south. But the Battle of Tannenberg was a warning that Russia’s military, like Russia’s monarchy, was on its knees and ripe for the death blow.

Alexander Samsonov, commander of the Russian Second Army, and Paul von Rennenkampf, First Army commander, had orders to invade East Prussia. But the two commanders were having problems sending and receiving messages to one another. Not all of the communication flaws were attributable to technology, however. The men, who had once come to blows, were so hostile to one another that, even though they were fighting on the same size, ostensibly with the same end in mind, Samsonov did not bother to synchronize the movements of his Second Army to match those of the First Army.

The Germans were led by the veteran Field Marshal Paul von Hindenberg and rising star Erich Ludendorf, who had been placed in command by Chief of Staff Helmuth von Moltke.

Back to those communication problems. Samsonov didn’t realize that the First Army advance had come to a halt and was not, as he assumed, conforming to plan. Nor did Samsonov know that the Germans were transporting troops and supplies to the battle area in daunting numbers. Samsonov didn’t know, but the Germans, who were intercepting the messages between the Russian commanders, did. Von Rennenkampf’s first intercepted message told the Germans the distance that separated the First and Second Armies, and the fact that the First Army was not heading toward the Second Army. The intercepted message told the Germans the route that Samsonov planned to take as he pursued the German Army to Tannenberg, where he believed the Germans had withdrawn.

But the Germans had no intention of being reckless. The German Army was told to head north in case von Rennenkampf actually did move to assist the Second Army. The German officer who was given the order ignored it, and moved his troops to the east so that the center of Samsonov’s forces would not be able to escape across the border. It was a case of defiance that would actually benefit the Germans although at the time it appeared to be another incident of insubordination. Berlin was also getting nervous and decided to remove troops from the Western Front and send them to the Eastern Front.

So as the battle got underway on August 26, the Russian Second Army with its 150,000 troops was doomed. But Samsonov didn’t realized until August 28 that he was surrounded by the German Army. He was out of options and short on supplies and he couldn’t communicate with his First Army. That night, he ordered a general withdrawal. The Russian troops responded immediately and fatally, dropping their weapons and fleeing in the direction of the Germans who surrounded them. The Germans took 95,000 Russian soldiers as prisoners of war; 30,000 Russians were killed or wounded. In addition, the Germans needed sixty trains to carry the equipment they’d captured back to Germany. 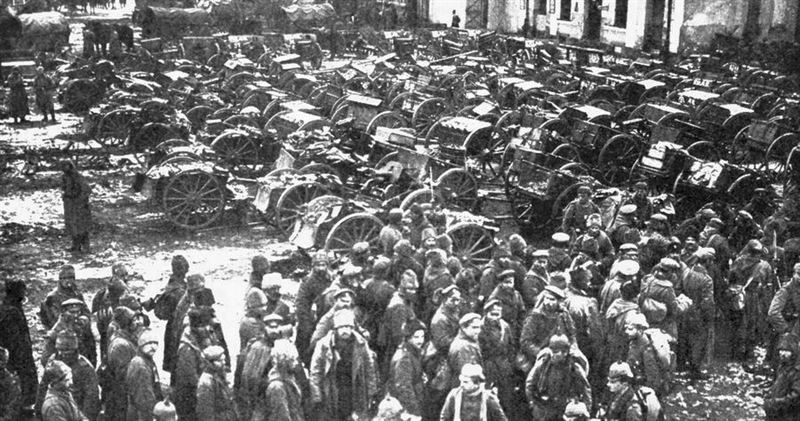 The defeat was overwhelming for Samsonov, who could not endure the thought of Czar Nicholas II learning about the catastrophe. The general went into the woods near Tannenberg and shot himself.

Perhaps Samsonov needn’t have worried about how Czar Nicholas II would react to the military defeat, because when the feckless ruler of Russia did learn of the number of troops who were killed, his response was that it was an honor for those dead soldiers to make such a sacrifice for the war. Ultimately, the sacrifice did benefit the Allies because the German decision to move troops from the Western to the Eastern Front halted the move toward Paris.

But for the Russian people, the loss was yet another reminder that the Czar was out of touch.  The following year, Czar Nicholas II announced that he would assume command of the Russian Army. Russian casualties continued to mount. The war was expensive for the weakened Russian economy and in 1917, food riots broke out. That same year, Nicholas was forced to abdicate.

Communist leader Vladimir Lenin was living in exile in Switzerland. In 1917, the Germans, figuring that the Russian anti-war movement needed a leader, allowed Lenin to travel through Germany in order for him to return to Russia. Their hopes were realized as the Bolsheviks took over the government in November, 1917. In March, 1918, Lenin signed a treaty with the Germans; in exchange for Poland, Ukraine, Finland, and other territories, the Germans would remove their troops from Russia.

The Romanov dynasty came to an end when the Czar and his family were executed in July, 1918. The history of the twentieth century would see Russia as an ally when the Second World War broke out, and then the enemy of the counties with whom it had battled the Nazis once the Cold War broke out. If not for Tannenberg, would the century have followed a different destiny?