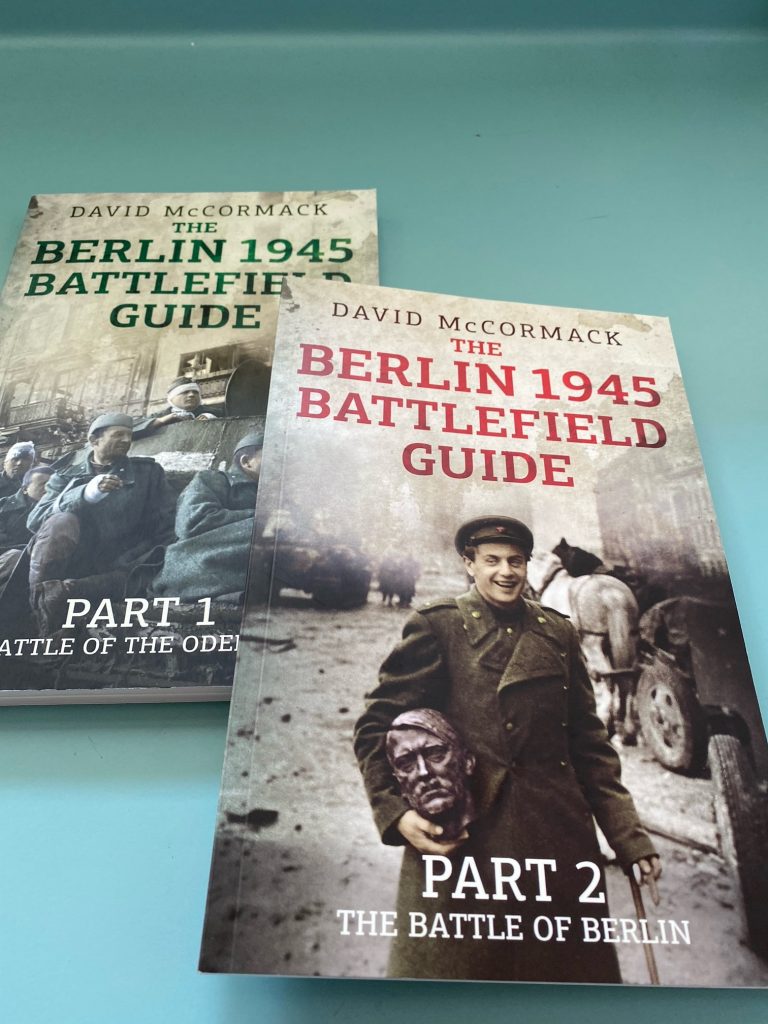 Being there . . . as the front lines shrank around Berlin in the Spring of 1945 when the Red Army
crossed the Oder River for its long-expected attack on the German capital. Watch how in less
than a dozen days the massive army groups of Zhukov and Konev (two of the best Soviet field
commanders of World War II) encircled Berlin, costing Germany almost 100,000 military and
civilian deaths during the bitter fighting, street by street . . . .
TWO BRILLIANT, COMPREHENSIVE CASEMATE BERLIN BATTLEFIELD GUIDES, METICULOUSLY
RESEARCHED, DESCRIBE A HORRIFIC STORY OF DEATH AND DESTRUCTION, AREA BY AREA
Reviewed and highly recommended by Don DeNevi
“THE BERLIN 1945 BATTLEFIELD GUIDE – – PART 1: The Battle of the Oder-Neisse”, by David
McCormack. Casemate Publishers: Fonthill Media, 160 pages, color and B&W photos; $24.95.
See: www.casematepublishing.com.
“THE BERLIN 1945 BATTLEFIELD GUIDE – – Part 2: The Battle of Berlin”, by David McCormack.
Casemate Publishers: Fonthill Media, 192 pages, color and B&W photos; $24.95. See:
www.casematepublishing.com.
Upon completion of reading and digesting these two remarkable “guides”, this reviewer stands
in awe and salute of the two commensurable forces which not only made the set available, but
also a remarkable achievement.
The first force is the writing of author David McCormack, a life-long military enthusiast and
respected historian of America’s war in the Pacific. Graduating with first-class honors in
Contemporary Military and International History, he was a prolific contributor of Japanese-
based historical articles for the International Academic Forum’s Eye Magazine and Armourer
Magazine. The second force is the editorial coterie at Casemate who welcomed David into their
prestigious corral of the world’s best military authors.
Writes author McCormack, “The purpose of my guide is to encourage and assist people in
visiting the battlefields along the direct approaches to Berlin which were the scenes of fierce
combat to the bitter end in April 1945. Of course, there are tours organized by long established
operators, some lasting between seven and twelve days, providing excellent introductions for
those keen on knowing more about WWII military history before visiting the German sites for
the first time. Of course, there are other options, i.e., organizing one’s own tour which requires
a certain degree of confidence, and not a little effort. My guidebooks should make the process
of organizing and conducting your tour of the Neisse battlefields less stressful and more
satisfying. I hope you read for yourself the joy I have tried to provide you as you journey to the

outskirts of Berlin to walk along the paths, trails, slopes, and dirt roads German and Soviet
troops walked, ran, and were killed on while fighting each other.
In short, the highly detailed and absorbing battlefield guide is the ideal companion for anyone
considering exploring the terrains on which the epic battles along Oder front were fought
between January and April 1945. Using his collection of in-depth research gathered as a well-
versed historian in the battlefield guide, the author vividly describes the last weeks of the
various battles on the Eastern Front which resulted in the Red Army advancing toward Berlin
despite dogged, skillful German defenses.
In addition, meticulous searches for, and discovery of, searing eyewitness accounts, add to
McCormack’s presentation of the ground fighting, all ultimately finding their way into a first-
rate, gold-rich chapters of information, especially on how to reach the least visited areas.
Furthermore, the guide is an essential book for understanding the staggering triumph of the
Soviets and the final collapse of Hitler’s last land forces defending the city of two million.
“Part 2, The Battle of Berlin” is the second ideal companion to grapple with “Hitler’s
Gotterdammerung” in April-May 1945. Here, David describes the apocalyptic struggle played
out among the ruins and mounds of rubble remaining in the once majestic city. His intimate
knowledge of the neighborhoods and their streets ensures that the Wagnerian climax of the
Third Reich is presented in a series of dramatic tableaux which captures the Third Reich’s
convulsive death throes.
Readers of the superb literature of WWII that has been mushrooming for the past decade who
decide to go will enjoy visiting the fascinating sites David McCormack selected in Part 2 among
the more than a thousand available. The guide is absolutely essential to fully grasp both the
importance of the Fuhrer’s downfall and the result of Stalin’s conquest today.