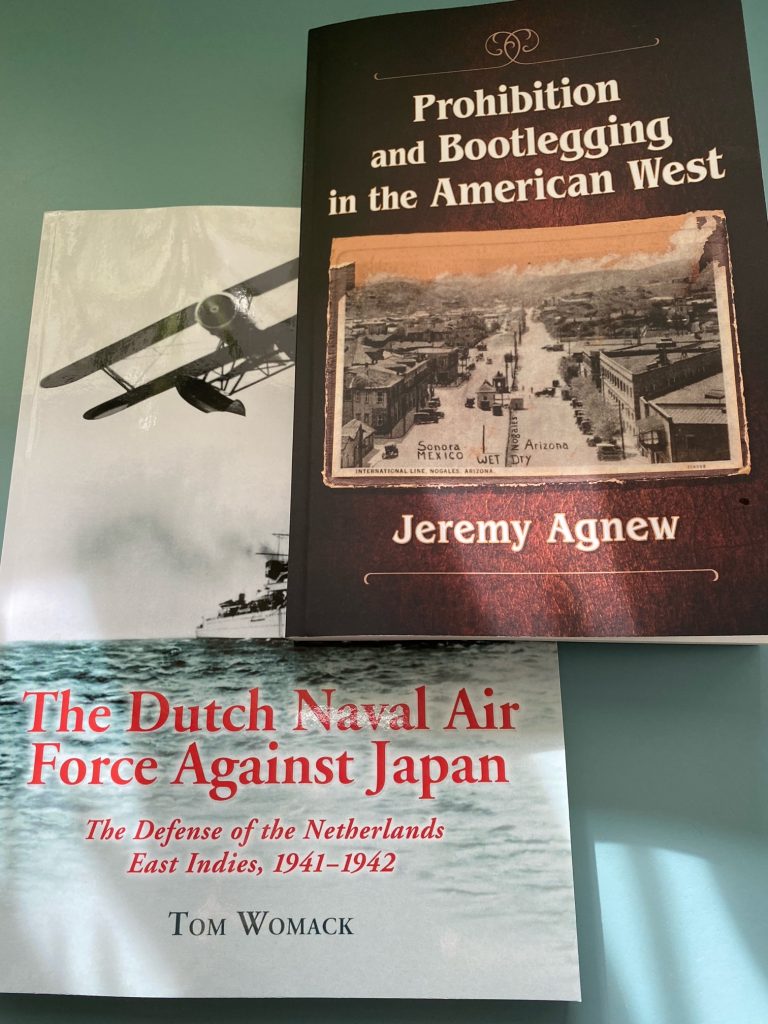 Being there . . . . on the evening of December 24 th or the morning of the 25 th as a gift-giver of
any number of McFarland’s newly published books as ideal companions for the recipient’s
personal library. There can hardly be a corner in literature the continuingly popular company
hasn’t explored, searched, and found appropriate authors for. Today, its bravery of designing,
then publishing, books of small sales promise not only astonish competitors, but also attracts
equally resolute researcher-authors. McFarland’s infinite number of titles, like those of fellow-
colleague publishers, Casemate, Osprey, Schiffer, and Naval Institute Press, testify to its sunny,
spirited ethic of “Costs be damned – GET THOSE SUBJECTS PRINTED AND PUBLICIZED!”. Now,
you can satisfy your buff’s insatiable desire to be widely read, unobtrusively well-informed, and
open-eyed imaginative, by considering at least the two titles below if gift-giving to a military or
American west aficionado. As the implacable gift giver, you are, expect to be lauded for
diligently having fed, if purchased, the receiver’s lively curiosity about all aspects of Prohibition
in America during the early 1920s, and, 20 years later, World War II in the Pacific Dutch East
Indies, the troops, and their places of battle. His or her wonderful sense of history will demand
he or she do so. . . . .
FOR THOSE WHO POSSESS A RARE SENSE OF HISTORY, TWO NEW BOOKS AWAIT WITH ALL THE
FRESHNESS OF FIRST DISCOVERY – – Thank you again, McFarland Publishing Company
Reviewed and Highly Recommended by Don DeNevi
For the World War II enthusiast, “THE DUTCH NAVAL AIR FORCE AGAINST JAPAN – – The
Defense of the Netherlands East Indies, 1941 – 1942”, by Tom Womack. McFarland & Company,
Inc., Publishers: 2006, reprinted 2022, 206 pages, 7”x10”, sc; $29.95. Visit,
www.mcfarlandpub.com.
Like virtually every country in the Far East, 7 December 1941 opened a new theater of war in
the Pacific. For the oil-rich islands of the Dutch East Indies, the Japanese High Command figured
it would require six bitter months of fighting to seize all. Despite the courage and bravery of the
islanders, and the Allies who rushed to their aid and defense, it took the enemy less than 48
hours to conquer all. The Dutch, with their Naval Air Force on Marine Luchtvaart Dienst (MLD),
made a significant, and often overlooked, contribution to the Allied effort. With their 175
aircraft, the MLD in Southeast Asia outnumbered American and British naval air reconnaissance
forces combined. Three months of intense fighting left the Dutch bereft of thousands of naval
personnel and over 80% of their aircraft.
This extraordinary, rare history, believe it or not, is the first of its kind in detailing the actions
of the MLD during the Japanese invasion of the Netherlands East Indies. Beginning with a look
at the origins of the MLD, the book provides an overview of the force, including an analysis of
its aircraft, equipment, personnel, and training. Author Tom Womack’s final chapters cover the
MLD’s ill-fated attempts of evacuation from the island battleground, while reviewing the MLD’s
performance when stationed there. Excellent appendices contain such information as Allied
and Japanese aircraft specifications, squadron tables of organization, and MLD bases and operational areas. The result is by far the most comprehensive English-language account of the
Allied naval air war in the Netherland East Indies. This book is exceedingly crammed with
information hitherto unavailable for the normal WWII armchair strategist. Hence, Tom has
contributed enormously, not only to the military literature of Japan at war in the southern
Pacific between 1941 and 1945, but also to the breath of our knowledge and understanding the
fighting that took place in the Pacific’s often inaccessible corners.
In “PROHIBITION and BOOTLEGGING in the AMERICAN WEST”, by Jeremy Agnew. McFarland
& Company, Inc., Publishers: 2022, 220 paged, 6”x9”, sc; $39.95. Visit www.mcfarlandpub.com .,
we have been provided a rarely researched and narrated story of what it was all about. During
Prohibition’s short life, every other American was writing or reading about it. Here, thankfully,
Jeremy Agnew, a biomedical electronics consultant, chronicles how Prohibition was imposed by
eager temperance movement organizers who sought to shape public behavior through
alcoholic beverage control. The success of the reformers’ efforts resulted in the establishment
of the National Prohibition in America Organization from 1920 to 1933.
“The history of Prohibition”, writes Jeremy, “is frequently told through the lens of crime and
violence in Chicago and other major East Coast cities. Often neglected are the effects of
Prohibition on the Western part of the United States. My history includes stories ranging from
serious to quirky while providing an entertaining account of how misguided efforts resulted in
numerous unintended consequences.”
The postcard on the book jacket cover is dated 1899 and shows how Nogales was literally
divided into two towns. The International Border ran through the middle of the photograph,
with the “dry” United States side in Arizona on the right and the wet side in Mexico on the left.
Some saloons were built straddling the border and patrons could enjoy either soft drinks or
hard liquor, depending on which end of the saloon they were drinking in! Thanks, Jeremy. Great
research; better than great writing; and, noting that the cover photo is from your personal
collection, the obvious question is when will you compose an illustrated history of Prohibition?