On June 1939, the second Filipino Q-Boat arrived in Manila and was named “LUZON” after one of the three Island groups of the country and was given hull number Q-111, she is 10 feet longer than Q-112 and has a cruising speed of 41 knots with a crew of 2 Officers and 4 Enlisted Personnel.

Three months earlier on 02 March 1939 the First Filipino Motor Torpedo Boat arrived in Manila aboard the Steamship SS Mecklenburg from Antwerp, Belgium she was christened “ABRA” after the Province of Abra and with Hull Number 112.

Thus, begin the Q-Boat mystery of the Philippine Navy, eventually, through the years Q- would be known as Quest for Mystery but would also signify as the Quezon Boat for President Quezon as the Offshore Patrol (OSP)- the naval arm of the Philippine Army was activated during his tenure.

From 08 December 1941 to 08 April 1942, the Q-Boats of the Offshore Patrol (OSP) would be in the thick of the action against the Japanese Invasion of the Philippines.

The Five Q-Boats of the Offshore Patrol, the 44-ship Navigation Division of the Philippine Coast Guard under the then Bureau of Customs and Ships of the Philippine Merchant Marine were commissioned into the OSP Reserve.

These seagoing forces forms part of the Philippines Naval Defense during those tumultuous days of 1942, along with the US Navy’s Motor Torpedo Boat Squadron 3 under LT John D Bulkeley USN and the US Asiatic Fleet Submarine Tender USS Canopus.

As the dark clouds of Japanese conquests embrace the archipelago, the Q- Boat Squadron made one final sortie with the plan of escaping the Japanese blockade of Manila Bay and proceed to Australia to join the other allied forces thereat.

On 2400H 08 April 1942 preparations were undertaken as the squadron made its final bid from Sisiman Cove in the Province of Bataan to Freedom.

The primary objective was to sortie out of Manila Bay to Corregidor then to Iloilo and  to Australia, leaving in echelon formation, the first sign of trouble appeared as the engines of  Q-112  gave up making LT Ramon A Alcaraz withdraw from the formation and scuttling the ship near Navotas.

Another Q-BOAT Q-115 “BALER” was also having engine problems as it was only making 12 knots from its usual 30 knots. All was well, but upon approaching the mount of Manila Bay, Japanese land based Naval Aircraft of the 1st Kokutai engaged the Q-Boats in the ensuing melee, one of the Japanese planes was shotdown.

As per LT CAMPO’s narration, the remaining Japanese planes circled the squadron as if waiting for something and a few minutes later, a lookout on one of the Q-Boats shouted “Ships ahead’. 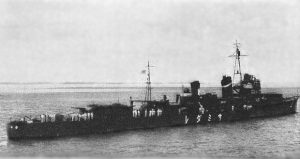 These ships were the Imperial Japanese Navy Destroyers HIJMS SAMIDARE and MURASAME part of the Japanese blockade and already veterans of the earlier engagements in the Pacific.

LT CAMPO’s narration of the battle that  the Q-boats gave a good account of themselves  but the Japanese naval gunners were good in deflection, though the Q-boats  guns counter-fired, while Mark 14 Torpedoes were launched  though  missing their target or lack the range to the enemy.

In a few seconds, Q-111 was on fire, she was scuttled off the Province of Looc, Cavite and Nasugbu, Batangas.

The fate of the Q-Boats on that day as follows;

Both LUZON and ABRA were British-built 55 feet and 65 feet Motor Torpedo Boats and capable of 41 Knots and armed with 2 x Anti-Aircraft Guns, 2 x Mark 14 Torpedo’s  They were the first and second FilipinoTorpedo Boats.

Q-113 ” Agusan”  was scuttled on 09 April 1942 as part of the United States Armed Forces in the Far East (USAFFE) OPERATION PONTIAC- were in no allied equipment should be taken advantage of the enemy, AGUSAN’s crew joined the Coast Artillery Corps, while it’s anti-aircraft weapons were incorporated into the beach defense force.

AGUSAN was the First PURELY FILIPINO BUILT TORPEDO BOAT patterned after the British Torpedo Boats. She was built at Engineer Island in Navotas under the supervision of Naval Architect/Civil Engineer Bernardo Abrera.

Q-114 ” DANDAY” named after the wife of MAJ Jurado was the former MV Carmen which was salvaged and refloated by the OSP through the assistance of the MV Carmen’s Marine Engineer Vicente Ty Dela Cruz. She was later burned to escape Japanese capture in Lamao, Bataan. She was the special operations craft of the OSP as she always handles agents and landing spies behind enemy lines.

Q-115 ” BALER” was the former Presidential Launch which was taken over by the OSP in December 1941.She was captured by the Japanese off Cabra Island with the whole crew and passengers totaling about 23 Filipinos and Americans.

The curtain would not be drawn with the defeat of the Q-Boats as the Island Fortress of Corregidor would hold on until 6 May 1942 as the Japanese completed their conquest of the Philippines.

Though the saga of Q-111ended off Batangas waters and to many lost in history as she was already scuttled, unknown to many she was re-floated and refurbished by the Imperial Japanese Navy and re-commissioned into the IJN on 12 April 1943 as Patrol Boat 114, but was again sunk by US Naval aircraft during their return to the Philippines in 1944.

Q-111 has the distinction of serving three Navies- The British Royal Navy as prior to delivery as she was tested by British Crews, The Filipino Navy and the Imperial Japanese Navy.

About the author: Commander Mark Condeno

E-mail and correspondence with Russian Tugboat Captain Ivan Gogin January 2017 who informed the author of the participation of HIJMS Samidare and HIJMS Murasame on the aforementioned operation.