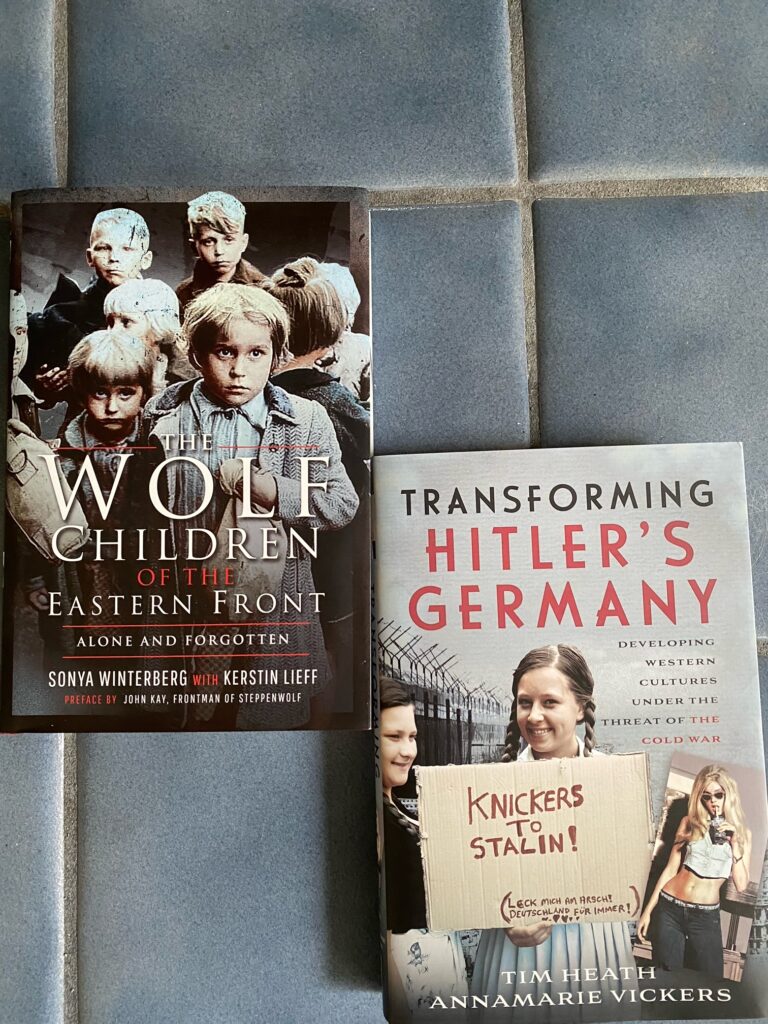 Being there . . . . in the near perfect prose of authors Tim Heath and Annamarie Vickers in
“TRANSFORMING HITLER’S GERMANY” (see below – – pages vi, vii), “As the Wolfkinder (wolf
children) gathered around bonfires fueled with the ever-increasing piles of Nazi flags and
literature, they stood impassive, staring into the flames, as if mourning their own lost
childhoods. They watched as the plumes of thick, black smoke rose into the sky above. One of
the girls clutched a small plastic doll, holding it close to her chest as she gently clutched a small
plastic doll, holding it close to her chest as she gently swayed from side to side as if attempting
to nurse a real infant to sleep. These Wolfkinder appeared as daylight ghosts among those
citizens going about their daily business; no one cared about them or whether they lived or
died. It painted a scene of dejection, void of all hope and unworthy of human compassion . . .”
TWO NEW CASEMATE BOOKS TESTIFY THAT WHEN HITLER’S HELL BURST LOOSE OVER ALL
EUROPE, IT WAS THE CHILDREN OF THE VANQUISHED AND, AND LATER, THEIR VICTORS WHO
SUFFERED THE MOST
Konigsberg, July 1945. On one of those glorious days, I walked along the deserted
Hagenstrasee. A small cart past me. Two children had their hands on the drawbar and were
trotting along the road to Juditten. On the cart, however, lay a wooden box just large enough to
hold the body of a small child, a bouquet of field flowers on top of it. Next to it there was still
room for the shovel. Two children were preparing to bury a third. Far and wide no adult!
Paul Ronge
Reviewed and highly recommended by Don DeNevi
“THE WOLF CHILDREN OF THE EASTERN FRONT – Alone and Forgotten”, by Sonya Winterberg
with Kerstin Lieff; Preface by John Kay, Frontman of Steppenwolf. Pen & Sword, MILITARY, Dist.
Casemate Publishers: 2022, 239 pages, 6 1/2” x 9 1/2”, hardcover; $42.95. Visit, www.penand
swordbooks.com, 7,000 titles available, or, E-mail: Uspen-and-
[email protected]
“TRANSFORMING HITLER’S GERMANY – Developing Western Cultures Under the Threat of the
Cold War”, by Tim Heath and Annamarie Vickers. Pen & Sword HISTORY, Dist. Casemate
Publishers: 2022, 255 pages, 6 ½” x 9 ½”, hardcover; $42.95. Visit,
www.penandswordbooks.com , 7,000 titles available, or, E-mail: Uspen-and-
[email protected]
“THE WOLF CHILDREN OF THE EASTERN FRONT” brings to light a hitherto neglected,
forgotten, or deliberately hidden tragedy of World War II, the sad, sad plight and predicament
of children, bereaving kids, orphans with no names, no national language, no identity who were
forced to flee then East Prussia, bordering the Baltic of East Germany, to Lithuania at the end of
World War II. After suffering the losses of their parents, they had to often survive the horrible
pangs of hunger, the freezing temperatures thinly clad, all with no knowledge who they were or
where they were going. Many, little boys and girls, were barefoot and riddled with lice. 25,000
of them roamed the woods and swamps of Prussia, West Poland, and Lithuania. Russians were

forbidden to take them in because they were “fascist children”. For decades their fates had
remained overlooked by Germany, even the government of the unified new Germany. Truly,
this one of unfortunate results of Hitler’s insatiable hunger for war and conquest. Fortunately,
some were lucky to be taken in, even lovingly cared for primarily by Lithuanian farmers, but
nearly to the last of them, they grew into adulthood illiterate and poverty-stricken. Yet, we
learn in this brilliant compilation a surprising truth lives within nearly every one of these victims
an overwhelming sense of hope and forgiveness. They were called the “Wolf Children”.
“TRANSFORMING HITLER’S GERMANY” is a unique, long hoped for and much anticipated,
work by two courageous, dedicated authors combining their narrative skills to tell the story of
the tentative taken by young men and women into the “afterlife” of Nazi Germany, Hitler’s
Third Reich, his dream of a “new type of German”. Encompassing memoirs along the way, the
book presents a quirky portrayal of charm, humor mischief, and personal accomplishment
along with a vitally important slice of (West) Germany’s social history, which has remained
hidden from the literary world for decades. In short, we have a hitherto unexplored slice of
West Germany’s social history during a transitionary period, and how the division of east from
the west shaped the traditional attitudes of German youth post-WWII. As Tia Schuster, a girl
and young woman who experienced her generation’s unique right of passage long denied, “The
world suddenly became a very big piece of pie. We wouldn’t be happy with just taking a slice of
this pie, no, we wanted the whole damn thing and we didn’t care if it made us sick!”.