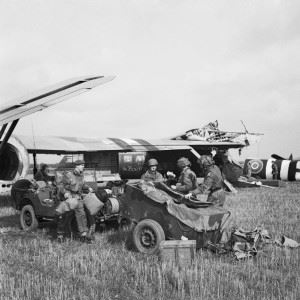 The first two gliders to touch down, their wing tips interlocked after colliding on landing. In the foreground are the Headquarters Artillery Group. Nearly all the vehicles of the 1st Airlanding Reconnaissance Squadron (whose task it was to lead the race for the road and railway bridges) were lost on route as several gliders broke their tow ropes.