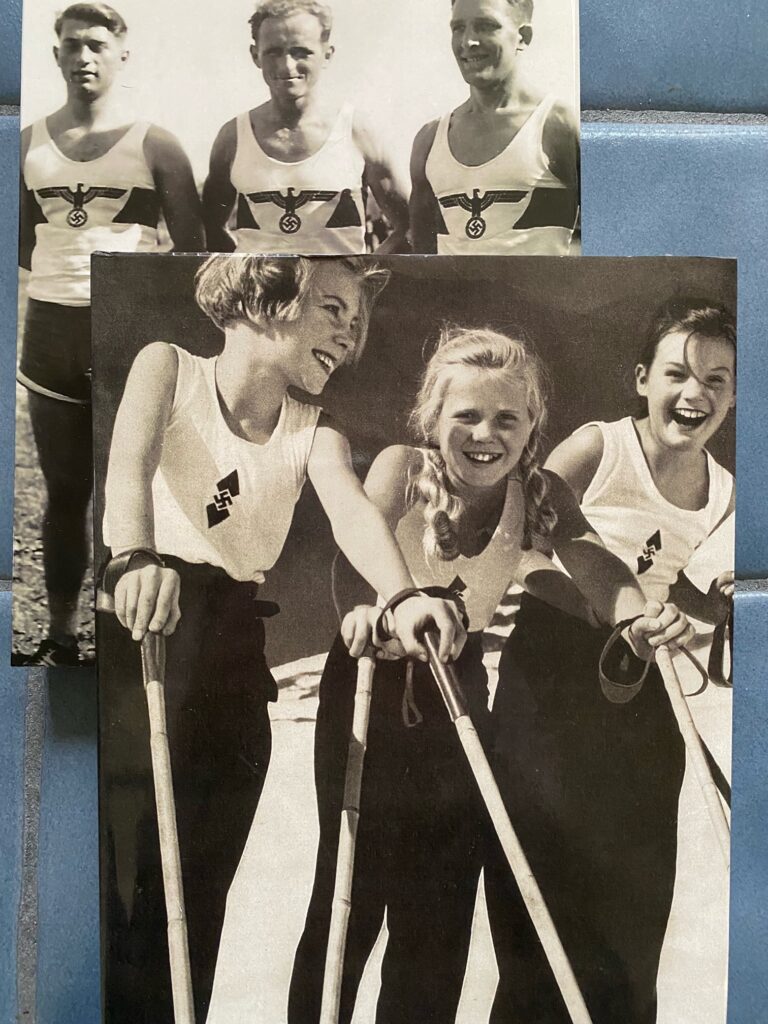 Being there .   .   .   .   .  when sports in Hitler’s Germany served a double purpose – – to establish the healthiest and most robust people in Europe, while simultaneously spawning superb athletes to shine in competition against rivals in order to soon lead illimitable numbers of youthful Germans as obedient and merciless warriors against the world  .  .  .  .  .

REVIEWER’S NOTE: Because of continual queries regarding my posting of “Part One: Sport and the Third Reich”, which I wrote last year featuring German athletes, their games, exercises, and sports prior to World War II, Part Two, sports while the Nazi-dominated nation waged total war, will follow this spring.

SPORTS TO CONTROL THEIR COUNTRY

How could the serious military or sports enthusiast not be interested? Even the leisure armchair buff would be curious, nay, enthralled, enough to peruse the photos of jubilant, unsuspecting Germans at play of what was on the horizon.

Again, thanks to Schiffer Military Publishing readers have before them the first comprehensive attempt at examining the association of sport with Hitler’s dream of conquering the world. Writes author Rob Newbrough, in his opening sentence, “A mass movement, propaganda, and physical and psychological terror were the components that Hitler believed to be necessary to gain control over a people and a nation, and sport could be a means to those ends.”

Volumes One covers the 1936 Winter and Summer Olympics, the 1938 Breslau Games, the sport uniforms, and Luftwaffe, Kriegsmarine, and Heer-Wehrmact participants. Volume 2 deals with the political leaders, SA, NSKK, NKFK, SS/Police, Hitler Youth, DAF/RAD, and miscellaneous sports topics. Surprisingly, specific information related to each component of the various sport uniforms, i.e., shirts, shorts, shoes, bathing suits, and athletic training suits, is provided. Especially interesting is Rob’s inclusion of the manner how rank was conveyed on the sport uniforms of the Wehrmacht and the organizations of the NSDAP. Readers will concur these two volumes are vital to military researchers, historians, and collectors. Even the philatelist will relish the sport related German postage stamps that are shown.

Hitler predicted that after 1940, and his conquest of half the earth, the Olympics would be forever held in Berlin. The Allies proved him wrong when five years later they staged an athletic competition in the Berlin Olympic Stadium as soon as the concrete swastika over the entrance symbolizing terror, horror, and systematic murder was blown to smithereens.

“Facts In Review”, issued by the German Library of Information in New York, published an article on August 24th, 1939, entitled, “Athletics, For One or A Million” touted the advantages of the German sports system. “Germany’s policies on sports have produced the most physically fit nation in the world. There is no doubt that Uncle Sam topped the field in the track and field competition of the recent Olympics. You might advise the Fuhrer to emulate the American system that only grooms athletes in the colleges and universities, high schools, athletic clubs, and playgrounds. National Socialism believes all German youth, not just those few who naturally excel, should be trained in track and field which are fundamental to labor services and army training. While America still produces more world record breakers than Germany, our Reich has many more boys participating in track and field than the United States . . .”

The reader can draw his own conclusions as to the main purpose of sports for the young German teenager under a Nazi dictatorship. Six days after this article was published, Germany invaded Poland, catapulting the world into an unparalleled cataclysm.