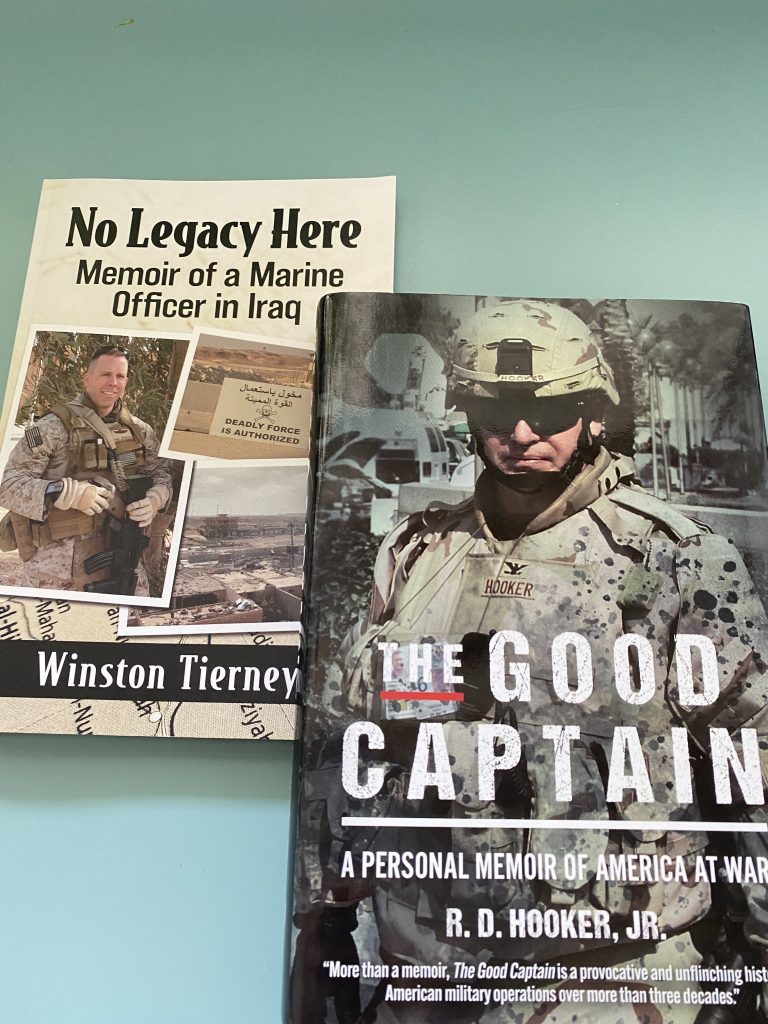 Being there . . . . to commingle with brave officers exemplifying, then imbuing to others, the
finest mien and milieu of the American military, especially in aggressive preparedness . . . .
TWO ACKNOWLEDGED SOLDIER-ARCHETYPES WRITE INTENSELY AFFECTING MEMOIRS
Reviewed and Highly Recommended by Don DeNevi
“THE GOOD CAPTAIN – – A Personal Memoir of America at War”, by R. D. Hooker, Jr. Casemate
Publishers, An AUSA Book (Association of the United States Army): 288 pages, 2002. hc; $34.95.
Visit: www.casematepublishers.com, or E-mail: [email protected]
“NO LEGACY HERE – – Memoir of a Marine Officer in Iraq”, by Winston Tierney. McFarland &
Company, Inc., Publishers: 183 pages, 2022, sc; $29.95. Visit: www.mcfarlandpub.com, or E-
mail: [email protected]
Honored by their own generational soldiers in the army and marines, and no less throughout
the militaries of the civilized world respectful of freedom and democracy, R. D. Hooker, Jr., and
Winston Tierney have each fulfilled the promise of his family’s legacy. These two transcendent
troopers have now had their inexorable combat stories published that are certain to inspire and
impel readers to gaze with wonder and awe at the depths and heights of the two more newly
discovered American heroes – – one, the most decorated colonel in the U.S. Army; the other, a
27 ½ year Marine infantry officer.
“The Good Captain”, as an infantryman, then officer who served America in five wars, resolved
to work sincerely at being a model of soldiery virtues, ideals, and courage in battle, lessons first
learned from dad, Colonel “Dick” Hooker, and western pioneer grandfather, Arco. Duty, honor,
and country were as natural to R. D. growing up as the family gathering together every night for
supper.
Enlisting in 1975 as a paratrooper of the U.S. Army’s 82d Airborne Division, R. D. later
graduated from West Point. For more than 30 years he commanded paratroopers at levels
ranging from second lieutenant to colonel.
R. D. Hooker, Jr., served in the invasion of Grenada, then, in the earliest days of the Somalia
intervention, and later the Rwandan genocide. Following his command of the first American
units to enter both Bosnia and Kosovo, then participating in peace keeping operations in the
Sinai desert, 9/11 found him at his desk in the Pentagon which, of course, could not sit him
down for long. Soon, thereafter, he was again commanding troops fighting in the fields of Iraq
and Afghanistan.
During his military career, he rose from private to colonel in charge of a paratroop company,
battalion, and brigade, serving in the continental U.S., Central and South America, Europe, the
Middle East, Africa, and Southeast Asia. When not serving with his troops, he taught leadership
courses at West Point, in addition to leading several high-level Pentagon assignments, including

stints in the White House administrations of George H. W. Bush, George W. Bush, Bill Clinton,
and Donald Trump.
From the beginning, R.D., plucky and courageously persistent, established a reputation for
bravery and strategic vision, leader, a fair-minded man of vast experience. For us readers, his
writings offer a first-person, hands-on, appreciation of the typical American soldier and his
close-combat endeavors around the world through five major conflicts, especially their heroic
interventions but resulting in certain tragic dimensions. Significant for readers is that R. D.
details each of his campaigns with the planning and policy perspectives gathered during his
White House and Pentagon work.
In his Foreword, R. D. warns, “This book is a memoir, not a history . . . In my long military
career, I found myself at the center of many great events occasioned by the breakup of the
Soviet Union and the 9/11 attack. My life has been shaped and defined by war – – as a child, as a
career soldier, and, even into retirement, through my sons, both paratroop officers and
combat-experienced . . . But while at the top, or in the trenches, our wars taught me much
about tough, roughened American combat soldiers. Often profane, independent, stubborn, and
aggressive, they also were warm-hearted, intelligent, selfless, and always, always brave. What
follows, then, is my story, as well as theirs.”
Equally compelling (and endearing) as a sincere memoir of service, not only about combat
experiences, but also maintaining morale and spirit so critically intrinsic to life and death
struggles, is Winston Tierney’s “No Legacy Here – – Memoir of a Marine Officer in Iraq”.
On the very first page of his remarkable reminiscences, Winston writes, “Why did I write this
story? Tell ya the truth, it’s because I got pissed off, while lacking the ability to keep my mouth
shut about it. If you know me, that won’t come as any surprise because you’d know I’m nothing
but a knuckle-dragging, bottom-feeding, mouth-breather. But do sit back and hear me out, then
ask yourself deeply and honestly if you’re convinced, I’m really wrong”.
Thus begins a subjugating account of what happened to him as a career USMC officer who
stalled somewhere along the line while believing in the doctrine of the Corps and the official
U.S. pretexts for war. In 2006, Winston deployed to Iraq’s Anbar Province with the Fourth
Reconnaissance Battalion, excited and proud to serve his country in the fight against
international terrorism. After several trips to Iraq over the following nine years, he felt depleted
from his increasing hatred mendacity, alcohol abuse, and PTSD, believing he had “seen behind
the curtain” – – and didn’t like what he saw.
Today, Winston Tierney (God bless the brave man!), who served almost 28 years in the Corps, is
a retired Marine Corps infantry officer who has succeeded in providing us with a hard-hitting,
often brutal memoir depicting the anguishing realities of the conflict in Iraq at the street and
gutter levels. All military enthusiasts are now presented a rare “clear-eyed view of the
immorality of war and America’s catastrophic failures in the Middle East”. We should be
grateful for the trooper’s controversial views.

“No Legacy Here” (what a title!) is destined for a prominent shelf position in the entrance
stacks of the Great Library of the Controversial. Best prepare yourself, buff, for dispute, debate,
a certain amount of quarrel, strife, and outright stubborn disagreement and disapproval. Of
course, some will argue Tierney ‘s effort is no more than a “bitter, mean book written by a
mean, bitter man.” Read “No Legacy Here – – Memoir of a Marine Officer in Iraq” after “The
Good Captain” to ponder for yourself whether R. D. Hooker, Jr. and Winston Tierney are
antithetical, or indeed blood-brother combatants, after all.