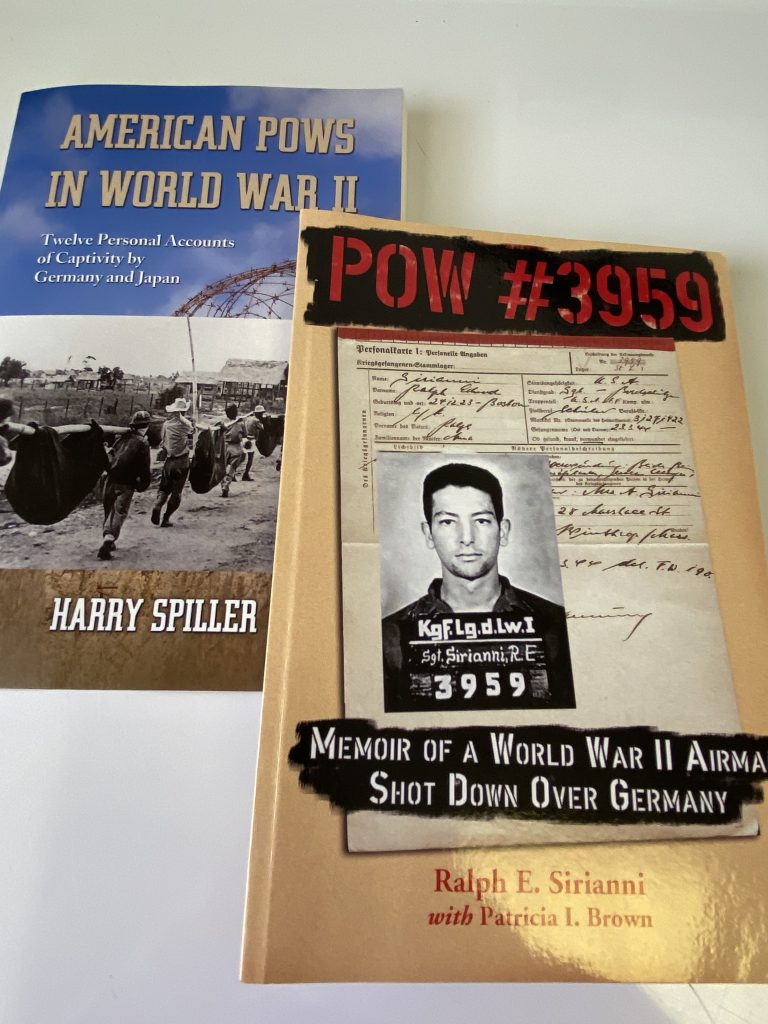 The solemnity of capture, barren barracks, razor-sharp barbed wire, the monotony, and claustrophobia of long, strained incarceration, imagining escaping amid searchlights, sentry towers and their deluge of rifle shots – – such were the endurance and hardship issues to overcome for survival recall two memorable memoirs.

“Maxim 109. Prisoners of war do not belong to the power for which they have fought; they are under the safeguard of honor and generosity of the nation that has disarmed them.”

UNDAUNTING RESOLUTIONS TO TELL THEIR STORIES OF CAPTIVITY

“When the war is concluded, I am

definitely of the opinion that all animosity

should be forgotten, and that all prisoners

In his masterful, “The Oxford Companion to Military History”, editor Richard Holmes writes that as we all know POW (prisoners of war) are combatants captured by the opposing side and confined until freed at the end of hostilities or some other is made of them, i.e., they are exchanged, ransomed, recruited, abandoned, or slaughtered. Today, as in the past, humane treatment of POW remains dependent on the circumstances, the resources, and the disposition of their captors.

All of which, thanks to the legendary editorial staff of McFarland & Company, Inc., Publishers, brings us to two of the company’s most lively, compelling, and consummately POW memoirs of WW II.

In World War II, 130,201 American servicemen were captured and held as prisoners. About 25% were captives of the Japanese Imperial Army and the remaining 75% by the Third Reich. Each experienced imprisonment differently, as the dozen Harry selected then embraced for inclusion in his anthology of reminiscences, show.  He writes, “The stories I collected, researched, and present are real. They give a true picture of men’s lives as American prisoners in World War II. Brutality, frostbit, disease, hunger, strenuous working conditions, and the jubilation of release are presented in the words of the soldiers, who describe such events as the Bataan Death March, the battle for Wake Island, D-Day, and the Battle of the Bulge. In some instances, they vividly portray the camps where they watched their comrades in arms suffer and perish”.

As fascinating as the maps and hitherto unpublished camp photos are, Harry’s appendices are even more so, including locations of Japanese prisoner of war, civilian and military camps, 1941 – 1945, and locations of German prison camps. They are priceless lists this reviewer has never seen assembled before. Also, Appendix C, German Regulations Concerning Prisoners of War, and easy-to-use index add to the importance of this minor classic “compendium”.

“The right to escape and not be punished unduly (30 days’ solitary confinement) was enshrined in the Geneva Convention”, says the Oxford Companion to Military History. For most POWs escape has been impossible, but for Allied prisoners in German camps during WW II, an escape attempt gave at least some relief to the boredom of prison life”.

In February 1944, 20-year-old Ralph Sirianni was serving as the right waist gunner on a B-17 when his plane crashed near Wildeshausen, Germany. Ralph bailed out, and, although alive, sadly spent the following 15 months in the “infamous” Stalag Luft 1 POW camp. His memoir offers unimaginable stories of air combat, delves into the despair of confinement, and relief of miraculous survival. He is often endearing when he recalls and remembers the camp’s camaraderie in the face of German abuse. Sirianni also tells his story of postwar reconciliation, both socially and psychologically. Especially interesting are the offer excerpts from Ralph’s POW logbook and pilot George McFall’s firsthand account of the ill-fated final mission that brought Ralph’s B-17 down.

POW #3959, who had never written a book before, has given us a rare emotional and truly insightful glimpse into what it was like being shot down, captured, incarcerated, and surviving. His effort is especially welcomed since the book includes his personal drawings and post war photos of family and friends. Editor Pat Brown was the author of “A league of My Own” (2003).