Listed are some of the new upcoming and soon to-be-released book titles related to the History of German Units, Armor and more.. They look promising and be sure to pre-order to save several dollars or euros. So definitely look out for these to add them to your library. Release dates may vary per continent, we’ve the US release dates. Feel free to give us more information on the books. 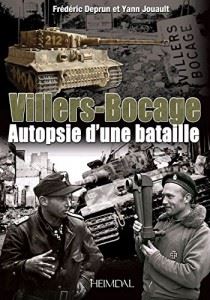 Villers-Bocage is undoubtedly one of the most emblematic events of the Battle of Normandy. Many historians have recounted the highly documented events of June 13, 1944, notably the destruction of a British armored column by Obersturmführer Tiger Michael Wittmann. Although one might think nothing more could be said, the veil of fog of this war still hangs heavy in 2014, and the battle continues to reveal more secrets! Yann Jouault and Frédéric Deprun have undertaken a thorough and extremely detailed analysis of the battles that took place on that fateful day. Such a thorough examination of the battle has now been made possible thanks to the testimonies and unpublished photographs that have surfaced over the last ten years, thus compelling the authors to continue their research and to establish an accurate and uncompromising chronology of events which include the breakthrough of the 7th Armored Division to the Wittmann attack, and the destruction of the last Tiger SS- Panzer-Abteilung 101 in the village. The study is divided into two parts: Wittmann’s last victory and the defeat of the Tiger, both of which will provide the reader with a better understanding of the facts and bring to light the persistent myths and legends. 192 pages, in colour, text in French. 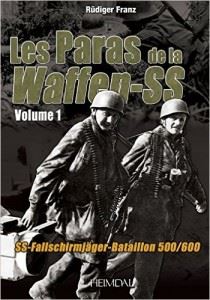 Here’s a largely unknown subject. A battalion of paratroopers of the Waffen-SS was formed in the fall of 1943, in order to carry out special missions. The author, Captain paras of the Luftwaffe (FRG), German Pat, French and US, in the sixties and turned historian, offers a detailed history in three volumes of more than 400 pages each.

The first volume is devoted to the operation against the Titoitess troops in Yugoslavia, the second to the commitment in the Baltic countries and the third at operations in Hungary, in the Ardennes and the beachhead of the Oder. All, dedicated to the SS-Fallschirmjäger-battalion 500/600 offers total documentation more thousand photos. 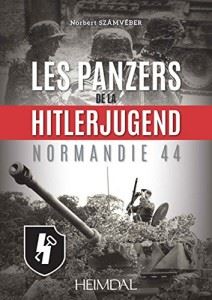 This is the war diary of one of the ” Hitler Youth ” found by the author. Here we can follow, day by day, engagement of the panzer division in the heavy fighting of the Battle of Normandy. Included is the number of engaged tanks, losses and successes with important notes and apparatus comments. This book is a valuable document for those seeking true information on this battle. It is accompanied by a rich iconography of forty previously unpublished photos. It is an essential contribution to better understanding World War Two.

#5. History of the Totenkopf’s Panther-Abteilung by Ian Michael Wood

This book is the culmination of 15 years of research dealing with I/SS-Panzer Regiment 3, from its inception in 1942, when it was equipped with Panzer III’s and IV’s, until its conversion to the Panther tank during late 1943. The book covers the history of I/SS-Panzer Regiment 3 when it was equipped with Panther tanks. From the summer of 1944, Abteilung fought in Siedlce and later in the defensive battles east and north east of Warsaw. Later during 1945, the Abteilung would take part in the Konrad operations in Hungary in an attempt to relieve the forces trapped inside Budapest. By March 1945 the remnants of I/SS-Panzer Regiment 3 was in full retreat and would eventually surrender in May 1945 in Austria.

#6. Tip of the Spear: German Armored Reconnaissance in Action in World War II by Robert Edwards 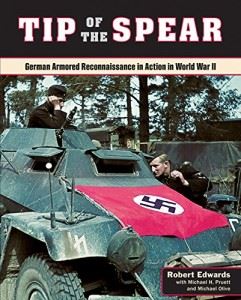 During World War II, German armored reconnaissance laid the groundwork–often through small-unit actions–for the stunning tank and infantry operations that made the German military famous. Robert Edwards’s follow-up to Scouts Out, the first extensive treatment of the subject in English, focuses on the battles and personalities found in ranks of the Waffen-SS, Luftwaffe, and other divisions. 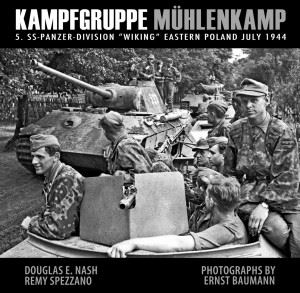 Kampfgruppe Mühlenkamp presents for the first time a sequential series of photos taken by Waffen-SS war correspondent Ernst Baumann in Eastern Poland during a two week period in July 1944. At this time the 5. SS-Panzer-Division “Wiking” was engaged in counter-attacks against Soviet armored and cavalry forces following their crushing defeat of Army Group Center in Belarus during the Red Army’s “Operation Bagration” summer offensive.

These stunning images of the Waffen-SS “Wiking” Division and “Germania” Regiment in action were scanned from the actual negatives and digitally enhanced and enlarged to bring out a previously unseen level of detail. Together with thoroughly researched text and captions as well as four military maps, the photos are shown in their proper sequence and matched with the dates and locations of the various engagements as they unfolded. The names of the officers appearing in the photos, and the troops, vehicles and weapons of the units under their command are documented in the accompanying narrative of the events which comprised the counterattacks at Kamieniec-Litevski and the relief of German Army Grenadier-Bataillon z.b.V. 560 on 22 July 1944.

The Sturmgeschütz-Abteilung 202 was one of the most successful German assault gun units in the Second World War. It had been deployed exclusively on the Eastern Front against the Red Army between 1941 and 1945. The StuGs of this unit were very effective AFVs on the battlefield in the role of heavy weapons for infantry fire support and also as mobile antitank firepower. Dr. Norbert Számvéber, author of Waffen-SS Armour in Normandy and Days of Battle, presents a detailed combat history of this unit, primarily based on archival sources. The book includes a significant number of rare photographs and several maps.

#9. We Will Not Go to Tuapse: From the Donets to the Oder with the Legion Wallonie and 5th SS Volunteer Assault Brigade ‘Wallonien’ 1942-45 by Fernand Kaisergruben 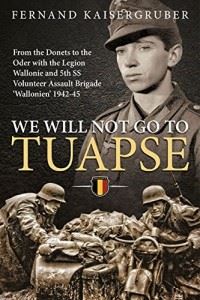 This is a classic soldier’s chronicle, told in unvarnished candor, about the author’s experiences as a volunteer with the Wallonian Legion of the German Army and later the 5th SS Volunteer Assault Brigade Wallonien and the 28th SS Volunteer Grenadier Division Wallonien. However, it also ventures far beyond the usual soldier’s story and approaches a travelogue of the Eastern Front campaign, seldom attained by the memoirs of the period. His self-published book in French is highly regarded by Belgian historian and expert on these volunteers Eddy de Bruyne, and Battle of Cherkassy author Douglas Nash. This book merits attention as the SS volunteer equivalent of Guy Sajer’s The Forgotten Soldier, a bestseller in the USA and Europe. By comparison, Kaisergruber’s story has the advantage of being completely verifiable by documents and serious historical narratives already published, such as Eddy de Bruyne’s For Rex and for Belgium and Kenneth Estes’ European Anabasis.

Until recent years, very little was known of the tens of thousands of foreign nationals from Norway, Denmark, Holland, Belgium, France and Spain who served voluntarily in the military formations of the German Army and the German Waffen-SS. In Kaisergruber’s book, the reader discovers important issues of collaboration, the apparent contributions of the volunteers to the German war effort, their varied experiences, their motives, the attitude of the German High Command and bureaucracy, and the reaction to these in the occupied countries. The combat experiences of the Walloons echoed those of the very best volunteer units of the Waffen-SS, although they shared equally in the collapse of the Third Reich in May, 1945.

Although unapologetic for his service, Kaisergruber makes no special claims for the German cause and writes not from any postwar apologia and dogma, but instead from his firsthand observations as a young man experiencing war for the first time, extending far beyond what had been imaginable at the time. His observations of fellow soldiers, commanders, Russian civilians and the battlefields prove poignant and telling. They remain as fresh as when he first wrote some of them down in his travel diary, ‘Pensées fugitives et Souvenirs (1941–46)’. Fernand Kaisergruber draws upon his contemporary diaries, those of his comrades and his later work with them while secretary of their postwar veteran’s league to present a thoroughly engaging epic. 400 pages.