Napoleon famously said that an army marches on its stomach, a quote which could easily serve as a bumper sticker for military quartermasters all over the world. No doubt his ill-fated trek into Russia caused France’s quartermasters no end of headaches, but that’s the fate of the military branch which oversees the logistical coordination of war, and American quartermasters had their own trials to bear.

I am Quartermaster. My story is enfolded in the history of this nation. Sustainer of Armies…My forges burned at Valley Forge. Down frozen, rutted roads my oxen hauled the meager foods a bankrupt Congress sent me… Scant rations for the cold and starving troops, gunpowder, salt, and lead.

A branch of the military which began its existence as a means to alleviate the privation of that first American war would naturally take its role very seriously. Quartermasters may lack the gallantry of a cavalry charge or the adrenaline of a raid, but they are the unsung heroes of a nation’s fighting forces.

In recognition of the role that the quartermaster plays, the United States Army Quartermaster Museum in Fort Lee, Virginia heralds the heritage of this historic branch of the military. Quartermasters in America go back to General Washington but the museum that celebrates their role in American military prowess has a more modern origin. That was in 1957, but the roots of the Museum reach back to General Montgomery Meigs who, late in the nineteenth century, began to collect items relevant to quartermasters. In the early days of the twentieth century, that collection found a home in the munitions building in the nation’s capital. Fort Lee’s Quartermaster School furthered the development of the museum when it put together reproductions of uniforms to show how military uniforms were fitted; that was in 1953 and the following year, the uniforms found a home. 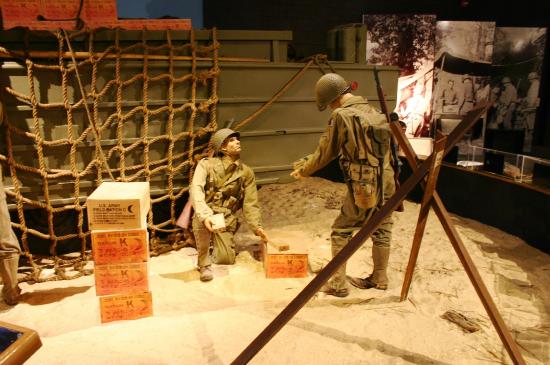 Today, the Museum boasts almost 24,000 artifacts dating from 1775’s War of Independence to modern warfare that tell the story of the Quartermaster Corps, along with thousands of documents that record the history of the Corps.

Flags are an intrinsic symbol of a nation and the Quartermaster Museum has memorable ones, including the very first flag to carry 50 stars, which was presented to President Dwight Eisenhower in 1960 after Hawaii joined the country as the 50th state.  The Museum also possesses one of the largest collections of the presidential flags, including the ones that were used by Presidents William Howard Taft, Theodore Roosevelt, Woodrow Wilson, Warren Harding, Franklin Roosevelt, Harry Truman, and Dwight Eisenhower.

Perhaps one of the most famous American generals to ever have served as a quartermaster was Ulysses S. Grant, when he was a lieutenant in the Mexican War. The Museum includes two items from the general who won the Civil War. His saddle, which he used from 1862 until 1865, was presented by Grant to a member of his staff, who in 1887 loaned the saddle to the Smithsonian. In 1968, the saddle was delivered to its current home at the Quartermaster Museum.

Included in the museum’s collection is the Jeep that was assigned to General George Patton during World War II. Of course, as one would expect, Patton’s military vehicle would, like the man it transported, have its own unique trademark. Patton’s Jeep bore Buell trombone air-horns that were mounted upon the hood so that Patton’s arrival could be announced in a manner suitable to his personality.

When Dwight D. Eisenhower was the Supreme Allied Commander in Europe, he had a twenty-five foot, six-ton semi trailer that served as his living quarters and field office on wheels and included shower and toilet facilities.  Ike may not have traveled in RV style as we know it, but he got the job done.

D-Day would not have been possible had it not been for the painstaking planning of the quartermasters, who had to supply 170,000 soldiers and do it without safe port facilities while facing fierce resistance by the Nazis.

One of the most solemn of the quartermaster’s tasks involves the care of the fallen, including search and recovery on the battlefield. The Quartermaster Corps also is engaged in the recovery and identification of the remains of prisoners of war and those who were missing in action from the wars in Vietnam, Korea, and World War II.

The Quartermasters Creed says it best:

I AM QUARTERMASTER. I can shape the course of combat, change the outcome of battle. Look to me: Sustainer of Armies…Since 1775.

I AM QUARTERMASTER. I AM PROUD.