USS Indianapolis: The Legacy, produced by filmmakers Sara Vladic and Melanie Capacia Johnson, was an official selection at this year’s GI Film Festival. The film follows the crew from the early days of WWII, when they joined the ship, to the present day, including their fight to exonerate their captain, Charles Butler McVay III.

The film’s subject, USS Indianapolis (CA-35), was flagship of the largest and most powerful fleet to ever sail the seas — the US Navy’s 5th Fleet in World War II. She fought battles throughout the war, and delivered the first operational atomic bomb to the island of Tinian on July 26th, 1945. Relieved of her cargo, she was ordered to the Philippines to prepare for the invasion of Japan. After stopping in Guam, she traveled onward without an escort. Hundreds of miles from land, at 14 minutes past midnight on July 30th, she was hit by two torpedoes fired from I-58, a Japanese submarine. The first blew away the bow, the second struck amidships near a fuel tank and powder magazine. The resulting explosion split the ship to the keel and knocked out her electric power. Within minutes she was down by the bow, rolling to starboard. In the 12 minutes before she sank, around 800 of the 1,197 aboard managed to safely abandon ship. Most of these men were left floating in kapok life jackets designed to last only 48 hours. Shark attacks began when the sun rose, and continued until the men were finally rescued, nearly five days later.

This epic story captured director Sara Vladic’s interest when she was 13 years old. “I couldn’t believe it was a real event when I heard about it, so I immediately went to my local library, and started searching. There was little information to be found, but it was indeed a true story.” After graduating college and realizing nobody had truly done the story justice, Vladic began reaching out to the USS Indianapolis survivors — and the journey began. That was nearly 15 years ago. “I never imagined that the research materials I gathered for a screenplay would turn into a full-length documentary. At the start, I simply wanted to get the story right, and I knew I had to interview the men that lived it.”

For over roughly ten years Vladic and Ben – her husband – conducted more than 104 interviews, creating 170-plus hours of irreplaceable footage. 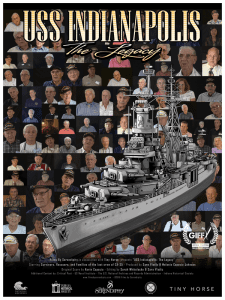 Johnson, a fellow producer who often accompanied Vladic with her interviews, recalls, “It was challenging to piece everything together with all the different cameras we used through the years. But with dedication, perseverance and the development of new technology we were able to make it all come together“. Reflecting on the experience, Vladic is grateful “to have made some of the best friends I’ve ever known, and been adopted by the survivors and their families as a granddaughter and keeper of their legacy. It was for them that I made it through this rocky roller-coaster of a process, and for them that I’ll make sure this story is told as it should be. My hope is that when viewers finish watching this film, they will know the survivors and understand how ordinary 17 and 18 year-olds fought and paid the price for their freedom.”

For 70 years, the story of the USS Indianapolis has been told as a sinking story, or a shark story, or a story of military justice gone awry. But INDIANAPOLIS: The Legacy, is different. Johnson states, “I feel what is so powerful about our film is that the survivors tell their story in their own words. There is no narration.”

The USS Indianapolis Survivors’ Organization has enthusiastically endorsed Vladic’s film, giving her their trust, and their full support. Supplementing the story, the documentary includes testimonies from the family members of those who were lost at sea–sailors and marines who paid the ultimate price.

After holding private screenings for the survivors and family members of the Indianapolis crew, Vladic and Johnson were overwhelmed by the positive response to the film. After the screening, Vladic remembers “crew members shared with me that it’s the first time their story had been told accurately on the screen, and in its entirety.“

One of our readers, Jim Belcher Jr., was presented at the film festival and reviewed this new documentary for Argunners Magazine. His true words: “The USS Indianapolis film, “USS Indianapolis: The Legacy Project”, was absolutely phenomenal! Narrated cleverly by Bob Bunai, a USS Indianapolis Survivor, it is possibly the most comprehensive, accurate and emotionally moving true story I have ever seen. From Okinawa kamikaze attack to ship sinking to rescue and recovery to court martial, exoneration to a burial at sea, this film never coasts. It is an emotional miracle story. I believe the men of the USS Indianapolis will be very proud of this film. It is told primarily in their words. Great use of actual interviews with Survivors, rescue & recovery men, and others associated with the history. A film to be proud.“

Director Sara Vladic was also awarded during GIFF for her wonderful performance. She won Best Female Director for the film at the awards banquet, and essentially won Best Director because they did not award a Best Male Director in light of their decision that her award represented tops for all Directors at the festival.

SYNOPSIS OF USS INDIANAPOLIS: THE LEGACY

The Legacy Project tells the fate of the World War II heavy cruiser USS Indianapolis using exclusively never before heard first-person accounts. The last crew and their families share gripping stories of kamikaze attacks, invasions, a secret mission, and ultimately a devastating torpedo attack that killed three fourths of the crew. The survivors recall the 5 days they spent floating alone in the Pacific Ocean, their miraculous rescue, and how they fought together to clear their captain’s name.

Start to finish, this feature-length film flows from survivor to survivor as they finish each other’s sentences. Set to a completely original score, the incredible story unfolds with rare WWII footage, a collection of previously unpublished photographs, open-ocean reenactments, and new footage from one of the last WWII era heavy cruisers in existence.