Nobody wins in armed conflicts because opposing sides always have casualties. Yet citizens of nations waging wars around the globe seem to think otherwise. In fact, during World War 2, the Union of Soviet Socialist Republics was no exception. Before, it used different means to promote beliefs and fight against oppressors. After the First World War and throughout the second, Soviet Propaganda was rampant.

During Joseph Stalin’s time, the communist government encouraged folks to take up arms. They had a constant need for manpower. To do that, authorities disseminated information through newspapers. But, more often than not, they handed out and posted large printed pictures with messages. Right now, one can now get help with writing papers for college about the Soviet Union propaganda. That’s because people recovered examples of Soviet propaganda posters. Also, the historians who collected and shared them have specific details about each. Yet, dedicated scholars obtained and distributed USSR documents not only to help students. They did so to show history to the young and old alike around the world. Most likely, their intent was to provide awareness and usher a better future for mankind.

In studying history or writing a paper, a person could take advantage of the said resources. For paper help and personal growth, the materials mentioned could explain a lot. They could point out why people acted the way they did back in the day. Aside from that, they could give one better understanding of how it was before.

Russia promoted a lot of things through imagery even before WWI. In WWII, recruiters disseminated sheets to influence people to enlist. They contained images of local military forces contributing to winning the war. When Russians and Germans were allies, there were posters to demonize their enemies. Then came the materials for the Russian Revolution in 1917 to cause the fall of the Tsar. Following that, WWII happened and new posters for indoctrination surfaced.

“The Motherland is Calling!” 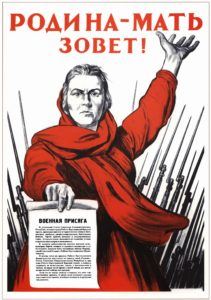 It’s the agitprop that came before and influenced the Battle of Stalingrad. Made by Irakli Toidze in 1941, it portrays a woman cloaked in red with a stern expression on her face. Her gaze gives a sense of persuasion to take action. On the image, she’s raising one arm and has the other holding a piece of paper that has the Red Army oath. Behind her, there many raised bayonets. Experts believe her hand gestures to symbolize recruitment. The presence of the weapons illustrates hope for victory. This was most likely crucial during the battle because it addressed several things. It was a powerful call-to-arms, given the symbolism. It showed Russia’s fascination for the mother figure. The woman also welcomes folks to the “Workers’ and Peasants’ Red Army” and promises triumph.

“Red Army Soldier, Save Us!” 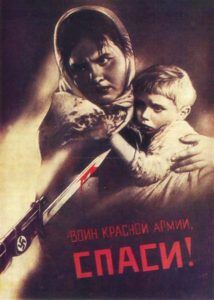 In 1943, it’s a compelling image that might have been effective in pushing people to join the cause. It shows a peasant woman and child threatened by a bloodied German bayonet. Created by the artist, Viktor Koretsky, it is a prime example of how agitprop works to convince people. Through the image, a person back then may equate German soldiers as evil. It exhibits the consequence of failing to end German forces or the threat to women and children.

Alexei Alexeevich Kokorekin produced this print in 1943 also. This one is a representation of the action that happens in the field of battle. It depicts a sailor, with only his inside shirt on, having a fatal injury to the chest area. He is covering his wound with one hand and preparing to throw a hand grenade with the other. His look of determination, action and the scene itself shows resilience. The probable intent of the art is to move individuals to join the Red Army and enlist in the Soviet Navy. 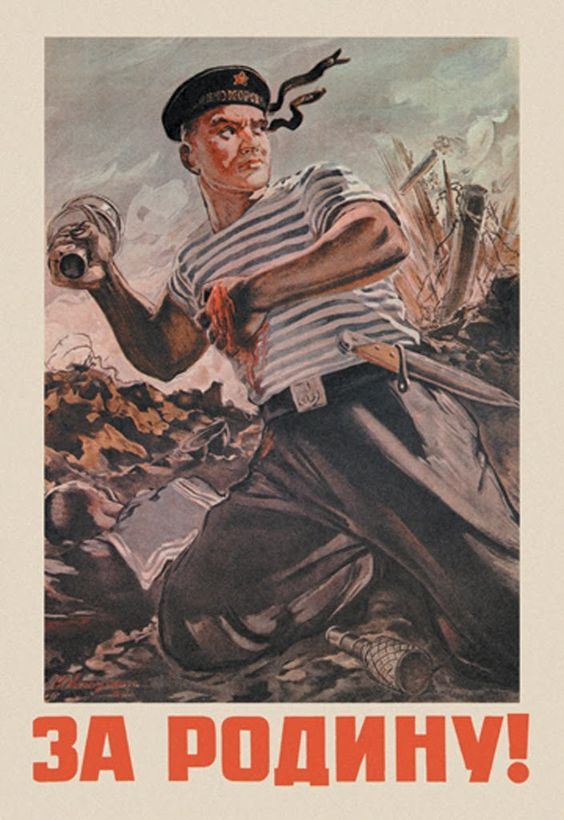 How Did Soviet Propaganda Work

Although artists made unique posters, they all had similar themes. Also, folks generally produced and disseminated agitprop for brainwashing. Here are some points on how they worked.

To achieve success, the communist government before showed examples of patriotism. When people saw heroism, some felt the inspiration to do their part. Those who joined the Red Army believed that they’re doing what is generally correct. That’s because joining the war, at the time, appealed to the masses.

They also used catchy phrases and appealed to emotions through scenes. The lines on the posters were easy to remember and thus simple to pass on from one person to another too. What they wrote down were statements that moved potential recruiters and soldiers. They asked for help to appeal to man’s innate inclination to protect and help. They also combined text with scenes that evoked pity, anger, and fear to recruit.