Hughes’ battlefield guide book, published in conjunction with the 75th anniversary of the D-Day invasion, is an exceptionally good example of the genre. It is packed with information, yet clear and concise. Hughes has done a great service for those readers who will be visiting Normandy for years to come. 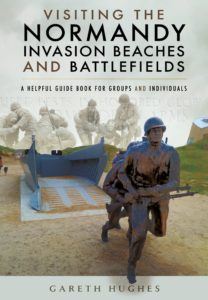 Gareth Hughes’ Visiting the Normandy Invasion Beaches and Battlefields: A Helpful Guide Book for Groups and Individuals is everything one should look for when planning a battlefield tour. He provides readers with itineraries that encompass the major landmarks and memorials of the invasion areas, estimates the length of each stop, and gives detailed directions to aid navigation between stops. The book itself is compact and will easily fit in a small day pack or the pocket of a pair of cargo pants, making it the ideal companion for a day of touring.

The amount of information provided in a small volume is the most impressive feature of Hughes’ work. He gives advice on how best to use the book, whether on an individual adventure or leading a larger outing. Hughes originally conceived the book as a guide for student groups and includes a specific chapter for organizing such tours. Additionally, the book briefly covers the size and organization of military units present at Normandy, the history of the Second World War in general and the Normandy invasion in particular, and various efforts towards post-war remembrance and memorialization. Hughes presents this information well, and all before the reader gets to the meat of the book, the itineraries.

Hughes presents two itineraries, one focused on the American sectors, and a second oriented towards the British and Commonwealth landing areas. The American itinerary is a one-day plan that examines the efforts of the 82nd and 101st Airborne Divisions at Sainte-Mere-Eglise and Sainte Marie-du-Mont, the Utah and Omaha landing beaches, and the Normandy American Cemetery and memorial. Hughes also covers the German cemetery at La Cambe and the Ranger Memorial at Pointe du Hoc in this itinerary. The British and Commonwealth Forces itinerary is a two-day journey covering Gold, Sword and Juno beaches, the British airborne achievement at Pegasus Bridge, the Canadian cemetery at Beny-Sur-Mer and the British and Commonwealth cemetery at Bayeux.  Hughes discusses each stop on each itinerary fully. He provides readers with a narrative of the action, orients them to the physical layout of the site and recommends activities to pursue such as viewing a specific landmark or touring a museum in the vicinity. He also supplies sidebars such as lists of smaller memorials that tourists should be sure to find. Hughes wraps up the guide with a list of local D-Day museums including addresses and telephone numbers, and a chapter on how readers can enhance their experiences by “going further, doing more.” This last chapter lists additional sites, not on the primary itineraries that visitors can seek out if time and inclinations allow.

Visiting the Normandy Invasion Beaches and Battlefields: A Helpful Guide Book for Groups and Individuals delivers. The itineraries are thorough, but not overwhelming. The guide is beautifully illustrated with black and white photographs on almost every page, detailed endnotes after each itinerary, and eight military maps that highlight particular actions. The maps are located with the appropriate text rather than grouped together in a separate section of the book. This cuts down on unnecessary page turning. I highly recommend it to knowledgeable battlefield explorers and general tourists. It has something for everyone.

This book is available on Amazon (US), Amazon (UK), and Pen & Sword Books.