Francis Scott Key didn’t plan to be stuck at Fort McHenry during a battle between the United States and its British foe. He had gone aboard the British fleet’s flagship to try to coax the British to release a friend who had been arrested and his efforts were successful. But—and it’s a big but, upon which the national soundtrack of America would depend—the British weren’t letting the Americans go. They couldn’t: Key and his friends knew that the British were going to attack Baltimore. So Key, who had been allowed to return to his ship, the Minden, had a ringside seat to the war.

The War of 1812 was a masterpiece of mistimed battles, but if not for the fact that the distance between Europe and the United States was so great, and communication so ponderously slow, America might not have its national anthem. Great Britain had never really taken its military defeat by George Washington and his colonial army seriously, and by the dawn of the nineteenth century, the British Navy, the most powerful in Europe, was impressing Americans at sea and forcing them to serve on British vessels. The seizure of 1000 American ships in 1806 by the British Navy enforcing its blockade of France was only one of the incidents that spurred the two countries to warfare, and when the hostilities between the countries led to conflict on land as well, the United States declared war on the enemy Americans had defeated in 1781. 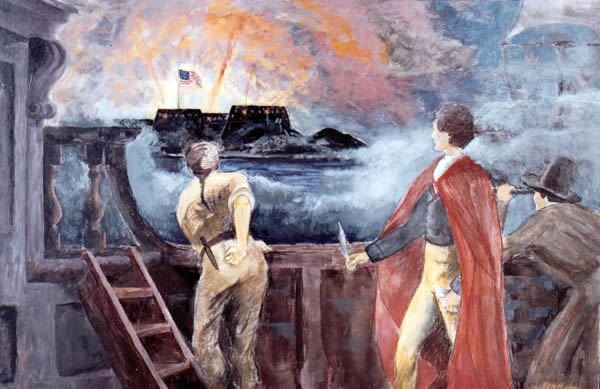 The United States was not prepared for war, but nonetheless managed to chalk up some significant victories while the British were dealing with Napoleon in Europe. But after the French emperor was defeated, Great Britain turned its imperial might on its former colonies. On August 24, 1814, the British burned the White House in Washington D.C., forcing President Madison to flee the nation’s capital. Buoyed by their success and the blow to American morale, Baltimore was next in their crosshairs.

Great Britain’s Vice Admiral Sir Alexander Cochrane and Major General Robert Ross moved up the Chesapeake Bay. Their battle plan had Ross and his 4500 men advancing on land from North Point while Cochrane, with his nineteen ships and 5,000 men, planned to go by water to attack Fort McHenry, which had 1,000 men and 20 guns to defend it.

Ross landed at North Point on September 12, 1814, where he was met by Brigadier General John Stricker, whose instructions were to delay the British so that Baltimore had the time it needed to complete its fortifications. Ross was killed in the battle that resulted, leaving Colonel Arthur Brooke in command. The following day, after a night spent in the rain, Brooke moved toward Baltimore.

Cochrane, who had begun to move his fleet up the river in the direction of the harbor’s defenses, couldn’t send out his heavier ships because of the shallow waters. But at 6:30 am on September 13, with five bomb ketches, ten warships and the HMS Erebus, the British were in position to begin twenty-five hours of bombardment with mortar shells. Recalling the opening salvos years later, Key wrote, “It seemed as though mother earth had opened and was vomiting shot and shell in a sheet of fire and brimstone.”

Brooke had been ordered not to attack unless he was absolutely confident of victory, but when he went ashore, he didn’t expect to find 12,000 American defenders protected by earthworks. He couldn’t find a vulnerable spot in the lines, so he had no choice but to hold his position while he waited to find out whether Cochrane was successful.

The answering fire from Fort McHenry’s commanding officer Major George Armistead forced the British ships, which had moved closer to the fort, to return to their original positions. From his position eight miles away, Key saw the red fire in the sky and was convinced that the British were winning. But more than 1500 rounds had failed to bring the fort to surrender. By dawn’s early light, Armistead replaced the fort’s flag with a garrison flag that measured 42 feet by 30 feet and had been sewn by a Baltimore seamstress. Key saw that “our flag was still there.” Cochrane saw the flag as well and came to the realization that his forces could not breach the harbor. On land, Brooke reached the same conclusion and led his troops in retreat toward North Point.

Peace negotiations were already underway to end the war, but the victory at Fort McHenry did more than make up for the burning of the White House. Once again, the United States had demonstrated its ability to defend itself against a foreign power and the victory helped the country in negotiations. 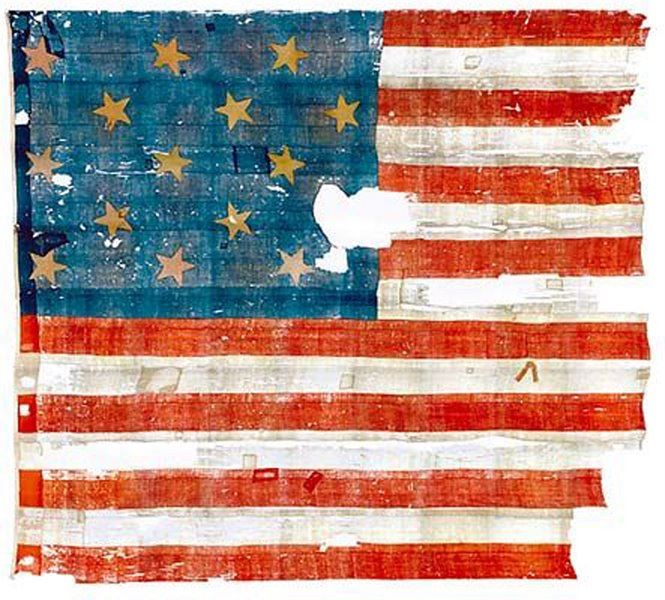 As he watched the battle, Key wrote a poem describing what he saw. Key set the words of the poem to the tune of an old drinking song. In 1931, the poem, which was titled The Defence of Fort McHenry, was made the official anthem of the United States.

The flag is still there. In 2008, after a preservation project that began in 1996, the flag that was still flying after the firing stopped went on display at the National Museum of American History, an enduring and battle-tested symbol of American triumph.