Were the cavalry the only mobile force capable of exploiting any breakthrough in the trench stalemate? Stephen Barker argues his case:

Monchy-le-Preux was one of the keys to the northern end of the Hindenburg Line, giving the Germans ideal observation over any advance from the British trenches in front of Arras five miles away. Third Army’s commander, General Sir Edmund Allenby, ordered the capture of the village and surrounding high ground, as objectives for the first day of the offensive – 9 April. In the eventuality that VI Corps infantry broke through the ‘Green Line’ just east of Monchy, Allenby ordered the Cavalry Corps (in conjunction with the infantry) to exploit the gains further – a distance of eight miles in total towards Cambrai. However, he made it clear that the cavalry was not to be used unless the infantry achieved their first day objectives.

This is important, reflecting Sir Douglas Haig’s order that cavalry be ready to deliver significant advances, yet also be handled carefully. Seemingly contradictory (any such unprecedented breakthrough would inevitably lead to heavy casualties) it also revealed the fundamental tension between those senior officers who believed that a comprehensive ‘breakthrough’ with cavalry was yet possible and those who subscribed to a ‘bite and hold’ doctrine. Yet Haig had recognised the limitations of the use of cavalry early in 1916, when a revision of the existing pre-war policy was undertaken. This stressed the value of close co-operation between cavalry and other arms; its ability to perform attacking and defensive duties and to operate in both mounted and dismounted roles.

Cavalry was increasingly viewed as one of several mobile elements – including tanks, armoured cars, aeroplanes and bicycle-mounted troops – working with the infantry. If a breakthrough of the enemy line was not possible, horsemen were expected to use their mobility and dismounted firepower to enable the infantry to establish and broaden gaps at critical times in the battle. They were to be capable of an effectual dismounted role, and sophisticated fire and movement tactics, including the taking and holding of ground, using speed and mobility.

In the context of trench warfare, the first day at Arras was a success, with ground up to a depth of three-and-a-half miles taken. But the gains fell short of Monchy-le-Preux. Its capture was planned again for the morning of April 11, when four regiments from 3rd Cavalry Division supported the infantry attack. 3rd Dragoon Guards reached the Monchy-La Bergère road, south of the village. Here, they dismounted and took up firing positions with their Hotchkiss machine guns, joining up a defensive line between 111 and 112 Infantry Brigades. They endured heavy artillery fire and were strafed by low-flying aircraft; fighting as infantry to repel potential counter attacks.

North of the village, Essex Yeomanry and 10th Hussars (supported by the Royal Horse Guards) galloped eastwards, looking to exploit any breakthrough. Meeting machine gun fire, they veered into its streets as ordered, and then ventured out once more to escape shelling this time, only to be driven back. The arrival of the cavalry in the village enabled the struggling infantry to establish a defensive firing line. By deepening shell holes, deploying machine guns and establishing two dressing stations, the dismounted cavalry stiffened the infantry’s resolve. They provided rapid reinforcements, leadership and organisational proficiency at a crucial time, before the arrival of tanks and infantry secured the village. 600 cavalrymen were casualties and many more horses died. The animals were tethered in the open as their riders took cover, while attempts to take them to the rear during a ‘box barrage’ only increased the killing.

Today, the apparent folly of employing horses during the Great War belies that fact that cavalry were the only mobile force capable of exploiting any breakthrough in the trench stalemate. For allied commanders searching for ways to return to ‘open warfare’ and to liberate French soil, there was no alternative – fast, dependable tanks were not yet available.  Yet at Arras, although the possibility of a decisive breakthrough was planned for, so too was it acknowledged by GHQ that the task of the mounted arm had changed.

By April 1917, the cavalry’s function in the BEF was not to deliver a headlong charge, as portrayed in the film adaptation of Michael Morpurgo’s novel War Horse. As the Arras offensive illustrated, cavalry were for the most part unused if infantry were unable to achieve their objectives. Monchy-le-Preux highlighted the cost of using horses in close proximity to an established and static defensive position, where the enemy possessed artillery and aerial superiority. Yet it also underlined that cavalry could still play a decisive part with a clear understanding of its function, efficient tactical innovations and great courage. 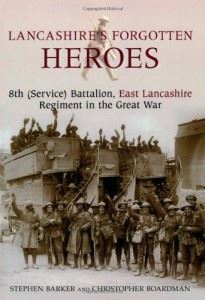 Stephen Barker is an independent Heritage Advisor – currently working with Oxfordshire County Museums Services, the Soldiers of Oxfordshire Museum and with Oxford-Brookes University. He has recently curated two First World War exhibitions. Stephen was a trustee of the Battlefields Trust for several years – working particularly on its educational materials. He has written a number of successful Heritage Lottery Fund projects including the establishment of a battlefield trail and archaeological survey of the Edgehill battlefield with Dr Glenn Foard.

Stephen gives talks about the British Civil and First World Wars to local history organisations. In 2009, he published Lancashire’s Forgotten Heroes – a history of the 8th East Lancs during the Great War.

Recommended Read: Theirs Not to Reason Why. Horsing the British Army 1875 to 1925 by Graham Winton is available to purchase.