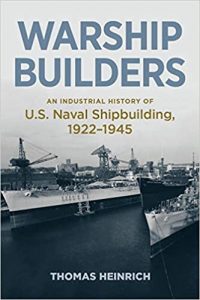 Publisher’s Summary: Warship Builders is the first scholarly study of the U.S. Naval shipbuilding industry from the early 1920s to the end of World War II when American shipyards produced the world’s largest fleet that helped defeat the Axis powers in all corners of the globe. A colossal endeavor that absorbed billions and employed virtual armies of skilled workers, naval construction mobilized the nation’s leading industrial enterprises in the shipbuilding, engineering and steel industries to deliver warships whose technical complexity dwarfed that of any other weapons platform. Based on systematic comparisons with British, Japanese, and German naval construction efforts, author Thomas Heinrich pinpoints the distinct features of American shipbuilding methods, technology development, and management practices that enabled U.S. yards to vastly outproduce their foreign countries. 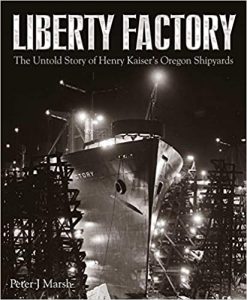 Oregon Shipyards” begins with Winston Churchill’s famous quote, so apropos for this fascinating visual tour, “The only thing that frightens me in the war is the Battle of the Atlantic, keeping open the lifeline between the US ‘Arsenal of Democracy’ and the UK. In the final analysis, it comes down to building merchant ships. Can we build them faster than the Germans can sink them?”

Crucial to this achievement was the “Liberty Ship”, a simple freighter that could be built with the untapped industrial potential of the USA in vast numbers overnight. This book tells the story of entrepreneur Henry J. Kaiser establishing huge new yards using novel mass-production techniques in various locations along the Pacific West Coast, including Vanport, Washington; Portland, Oregon; Oakland and San Francisco, California, among many other locations. Kaiser’s Oregon yards built 450 “Liberties”, including one built in the record time of 10 days, 150 tankers, 50 escort carriers, and countless amphibious warfare ships.

Evident on closer inspection of Churchill’s fear when he served as Prime Minister between May 10, 1940 and September 15, 1945 were several haunting questions”, If Britain’s lifeblood is shipping, will all be lost unless our boats stay afloat and their convoy routes stay open? Who will rule the waves in the Atlantic and Pacific? Can the Allies really build merchant ships faster than Hitler’s U-boats sink them? Will the World War I convoy system of ‘safety in numbers’ suffice the German Kriegmarine’s innovations in submarine attacks, anti-submarine weapons, depth charges, magnetic mines, and the menace of the Focke Wulf FW 200 Condor bombers?”

Where Thomas Heinrich enlightens readers unfamiliar with World War II combat boat design and construction with the amazing story of how flexibility, creativity, and initiative were essential to victor, Author Peter Marsh adds enormously to one’s understanding of wartime shipbuilding by guiding us photographically on a spellbinding tour of entrepreneur Kaiser’s impelling Oregon shipyards. Where readers interested in the history of the U.S. Navy, business technology and industrial mobilization, seek information on shipyard management and shop floor practices, they turn to Dr. Heinrich, forever the conscientious professor, to simplify such complex subjects. Readers will appreciate how Dr. Heinrich not only straddles naval and industrial history, but also explores the broader, political, and strategic contents of the interwar period and the Second World War.

Equally brilliant, but in his own way, i.e., an inherent love of Britain’s maritime heritage, building his own small boats to sail along the Pacific Northwest coast, Peter J. Marsh offers an extraordinary valence to the meticulously researched “Warship Builders” by propelling us perusers via hundreds of crystal-clear black and while photographs into the Oregon Shipbuilding, Portland, Yards. There, in ten-day, eight to ten hour, shifts, heavily weighed down with portable oxy-acetylene torches emitting hot flames, we’re placed side-by side with Rosie the Riveter and Wanda the Welder. Thoughtfully, Peter allows us to tackle the most difficult of all shipyard work, riveting headed pins and bolts to ship bottom seams.

Thanks to “Liberty Factory”, we, too, stand alongside craftsmen, assorted workers, and administrators and watch as Liberty Ship after Liberty Ship roll down the slipways to be suitably fitted for immediate departure to the cold Atlantic and farther reaches of the Pacific. Taken together, read one after the other, a rare peak experience occurs in excellent World  War II literature, observing first-hand how the flow of supplies across the Atlantic was saved.

Ratings – 5 stars for each volume