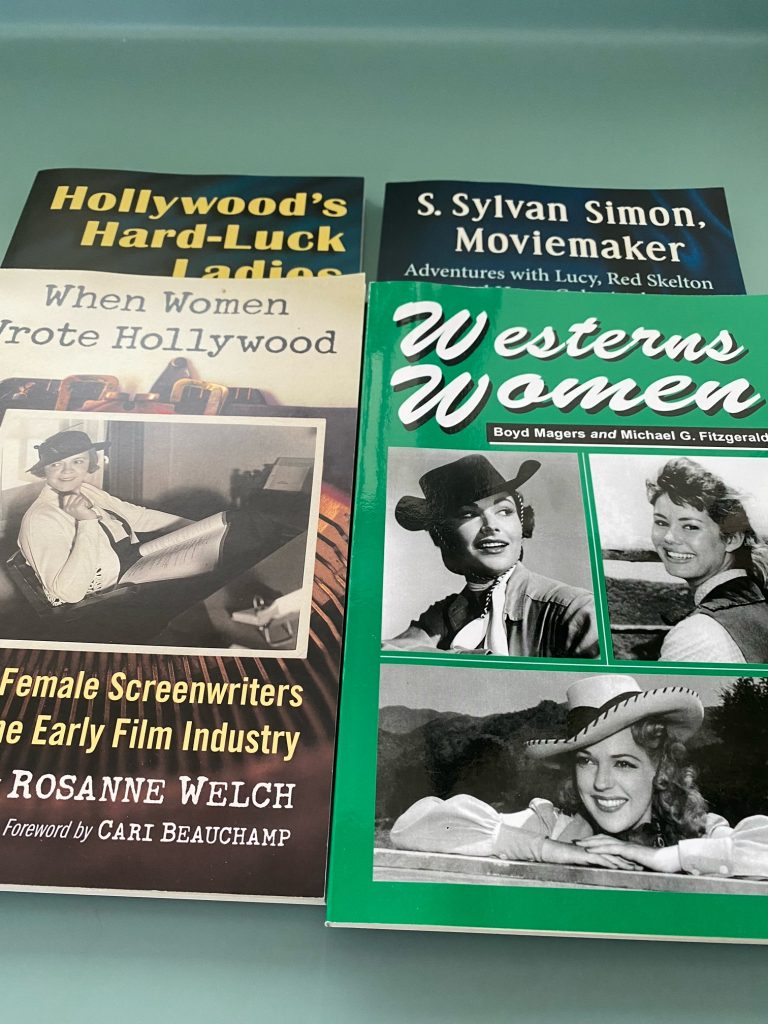 Being there . . . . to continue tracing the unsung, forgotten, obscure, neglected, slighted,
ignored lives and careers of several creative, dynamic, loving women who contributed so much
to early American cinema . . . . .

“UNLIKE SO MANY, THESE FEW UNDERSTOOD NO ART CAN SO POWERFULLY EXPLOIT THE
DIMENSIONS OF TIME AND SPACE – – – NO OTHER ART HAS SO MANY WAYS OF INVOLVING A
HUMAN BEING. IT INVOLVES EYES, EARS, MIND, HEART, ALL APPETITES AND ALL AT ONCE.
CINEMA IS DRAMA, MUSIC, POETRY, NOVEL, PAINTING AT THE SAME TIME. IT IS THE WHOLE OF
ART IN ONE ART, AND IT DEMANDS THE WHOLE OF YOU THE WHOLE TIME . . . .”, thank you,
Time Magazine Cinema Reviewer, Brad Darrach, Time – The Weekly News Magazine,
September 20, 1963, page 82, “CINEMA – A Religion of Film”.
Because Part One, “Nazi Films in America, Behind the Scenes of ‘They Were
Expendable’, The Films of Audie Murphy”, and Part Two, “Dynamic Dames –
50 Leading Ladies Who Made History”, were so well received, this reviewer
had to develop this Part Three . . .
Reviewed and Highly Recommended by Don DeNevi

“WHEN WOMEN WROTE HOLLYWOOD” is a collection of more than 20 essays focusing on
the lives of female screenwriters of the Golden Age of Hollywood. Their writings helped create
unforgettable stories and characters beloved by audiences to this 2022 year. Who ever heard
of Ida May Park, Eve Unsell, Gene Gauntier, Lillian Hellman, Adela Rogers St. Johns, Anita Loos,
let alone what they wrote. Absolutely a must read for the serious Hollywood buff, or student of
cinema resolute in finding a career in the motion picture industry.

“HOLLYWOOD’S HARD-LUCK LADIES” is a sad text to hold and read. Yet, again, an absolute
must to all who love cinema. In the motion picture industry, from the very beginning, there
have been so shortages of tragedies, i.e., movie stars succumbing to mental illness, addiction,
accidents, suicides, early deaths and more. Author Laura Wagner, a brilliant young writer,
poignantly depicts those women who achieved some measure of success before fate dealt
them losing hands, in full public view, no less. Overviews of their lives and careers provide a
wealth of previously unpublished information and set the record straight on long inaccuracies.
Excellent research, and a personal thank you from this reviewer, Laura.
“WESTERN WOMEN” offers a superb collection of leading ladies of Westerners, along with
several who are not so well-known. Most toiled in B westerns, and a select few worked
exclusively at the A level, while a few drifted into television. Even the most knowledgeable
movie enthusiast will be hard pressed to recognize more than a smidgen of the 50 stars, let
alone not fall in love with the glossy close-ups.
“S. SYLVAN SIMON, MOVIEMAKER” directed or produced more than 40 films, with stars like Red
Skelton who considered him his favorite director, Lana Turner, Abbott and Costello, Wallace
Beery, and literally hundreds of others. He loved to make people laugh, think, and, above all,
feel to the very cores of their hearts. Whether war stories, murder mysteries, musicals, dog
stories, westerns, it didn’t matter. “Just hand me the script, I’ll know what to do.” No doubt he
was a genius. The great loss for American cinema was that he died at the age of 41 while
directing “From Here to Eternity”. This biography is the first ever of Simon’s life and career,
drawing on interviews with family and colleagues, genealogical records, archival materials and
his own annotated scripts.
Stay tuned, more McFarland’s to follow in the coming months.