What passing-bells for these who die as cattle?
–Only the monstrous anger of the guns.
– Wilfred Owen, “Anthem for a Doomed Youth”

My friend, you would not tell with such high zest
To children ardent for some desperate glory,
The old lie: Dulce et decorum est
Pro patria mori. -Wilfred Owen, “Dulce et Decorum Est”

In December 2016, a century will have passed since Wilfred Owen, generally acknowledged as the greatest of the British poets of the First World War, sailed for France, ready to fight the Germans in the war that was supposed to end all wars. Reading accounts of the British forces in France, it is hard to miss how many of them were school boys, upper class and well educated, sure that God was with them, and would help them defeat the forces of the Hun.

What they entered instead was mud that threatened to drown them, commanders who had not adjusted to a new reality of war, and an enemy that was just as determined not to give up as they had ever been. 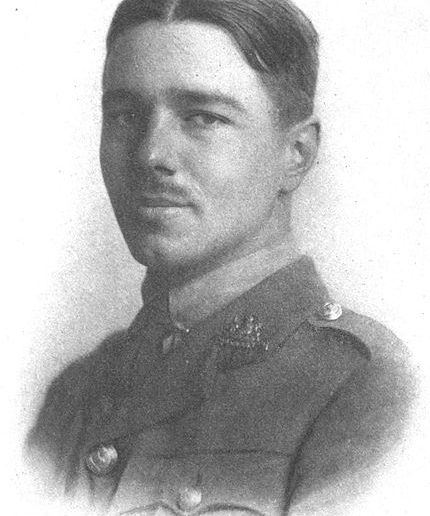 A regular theme in war poetry, especially those poems written towards the end of the war, is disillusionment. For Wilfred Owen, however, this theme has always seemed particularly poignant. The other great war poets – Robert Graves, Siegfried Sassoon – both enlisted in the armed forces in August of 1914, as soon as the war was announced. Both of them were caught up in the first wave of patriotism; according to their own accounts of their enlistment, they believed the politicians who swore that they would be home by Christmas.

By contrast, Wilfred Owen was in France, working as tutor, when war broke out. During 1915, he visited wounded soldiers on the French front, and was deeply moved by their experiences. He returned home to enlist, not while the first blush of patriotism was driving young men to the recruiting stations, but when the generals knew that the war had reached a stalemate, and were not sure what they would do to break it. He enlisted when the professional army was, for all intents and purposes, decimated. He did not reach the front until 1917, six months after the schoolboy soldiers had been destroyed at the Somme.

While Wilfred Owen had written poetry before the war, as many of his class and persuasion did during that time, it was his encounter with Siegfried Sassoon in 1917 that drove his development into the greatest poet of the time.

Shortly after reaching the front, Wilfred Owen suffered shell-shock and was removed to recover. It was during this time that he met Sassoon, and wrote to a friend that Sassoon read several of Owen’s poems and helped him revise them. “Sweat your guts out writing poetry,” Sassoon told him on 22 August 1917.

Charting Owen’s reactions to the war based on his poetry is hard; he never dated his manuscripts other than with the year. We know that in one manuscript he wrote:

-The Ballad of Purchase-Money

And at another point the same year, wrote:

War broke: and now the Winter of the world
With perishing great darkness closes in.
– 1914

Similarly, while all the letters that Wilfred Owen wrote to his mother, Susan, from the front have been preserved, his mother destroyed a number of Owen’s own papers, apparently on his instruction. His brother Harold prevented research into Wilfred’s life for decades. It is known that Wilfred Owen and Siegfried Sassoon kept up a constant correspondence from when they met until Owen’s death in 1918, but Sassoon burned all of the letters upon hearing of Owen’s death.

While at Craiglockhart, Owen also met Robert Graves, who had come to visit with Sassoon. Timelines seem to indicate that the first drafts of both “Disabled” and “Dulce et Decorum Est” were written after that meeting.

In October 1917, a medical board cleared Owen to return to active duty in France. Reading his letters from the last year of his life, it is difficult to forget his oncoming fate. For example, when he writes to his mother on New Year’s Eve, 1917:

I am not dissatisfied with my years. Everything has been done in bouts: Bouts of awful labor at Shrewsbury & Bordeaux; bouts of amazing pleasure in the Pyrenees, and play at Craiglockhart; bouts of religion at Dunsden; bouts of horrible danger on the Somme; bouts of poetry always; of your affection always; of sympathy for the oppressed always.

I go out of this year a Poet, my dear Mother, as which I did not enter it.

It is hard not to imagine Owen writing his own epitaph, summarizing his life. While he appears to have held back in combat previously, Owen was awarded the Military Cross for his actions at the Hindenburg Line in October 1918. At that battle, he took a machine gun and caused “considerable losses” in the opposing side.

Owen died on 4 November 1918. Below the tiny village of Ors, a canal seventy feet wide was treated as a crucial military objective, even though the Germans were widely acknowledged to be all but defeated. The German side of the bank was well defended by machine guns; wave after wave of men attempted to set up a floating bridge and were killed. Owen, standing on the bank and encouraging his men, was shot and killed.

On 11 November 1918, the Armistice was declared. His parents heard the news of Wilfred’s death as the church bells throughout their home town rang out the joy of peace.

Whatever reasons Wilfred Owen originally gave for joining the war, the reason he stayed appears to have been a desire to bear witness to what was happening around him, and give voice to those who were suffering. Although both Sassoon and Graves encouraged Owen to complete a volume of poetry, they both urged him to give time for his voice and his style to mature. Wilfred Owen, of course, never compiled his own volume of poetry. He does, however, appear to have scribbled down something that many believe to have been a kind of preface to his body of work:

Above all I am not concerned with Poetry.

My subject is War, and the pity of War.

The Poetry is in the pity.

Yet these elegies are to this generation in no sense consolatory. They may be to the next. All a poet can do today is warn. That is why the true Poets must be truthful.

A hundred years later, Owen’s statements echo across the years. The war to end all wars spawned one of the most horrible genocides in history, and destabilized entire areas of the world for generations to come. Perhaps it is time for readers to listen more closely to the poets.