Almost a week after RV Petrel announced they had discovered the first Japanese battleship to be sunk during World War II, Battleship Hiei, the research vessel discovered the wreckage of USN aircraft carrier USS Hornet (CV-8).

The USS Hornet (CV-8) was sunk during the Battle of Santa Cruz Islands on the 27th of October, 1942, 140 of her crew went down with her. She was discovered on January 20, 2019 and was positivily identified, after footage from the wreck showed the Hornet’s naval designation: CV-8. The wreck was located at a depth of more than 17,000 feet (5,200 m) off the Solomon Islands.

“The length of the Hornet as she sits now is 205 meters measured on the flight deck. There is approximately 45 meters of the stern missing and is in the debris field 1 nautical mile away. You can also see the initial impact crater as Hornet hit the bottom and slid 100 meters.”, according to RV Petrel. 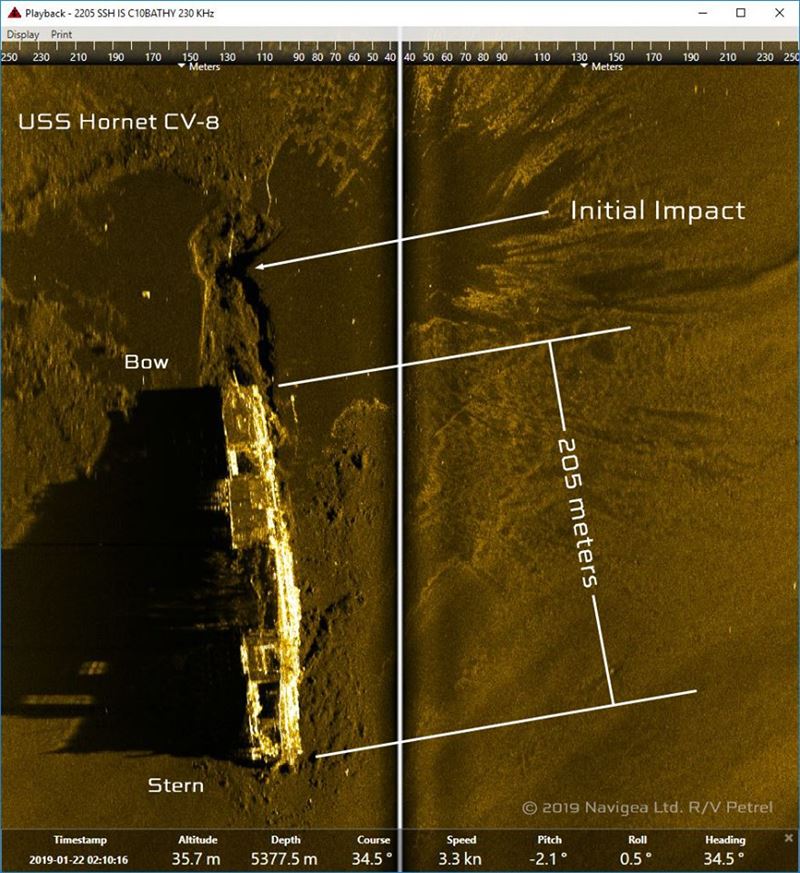 The Hornet is best known for for the Doolittle Raid, when on April 18, 1942, sixteen B-25B Mitchell medium bombers were launched without fighter escort from the aircraft carrier USS Hornet (CV-8) deep in the Western Pacific Ocean.

During the Battle of the Santa Cruz Islands where she was irreparably damaged by enemy torpedo and dive bombers on October 26, 1942. Faced with an approaching Japanese surface force, the Hornet was abandoned and later torpedoed and sunk by approaching Japanese destroyers around 0100 hours on 27th of October, 1942. 140 sailors when down with her. Hornet was the last US fleet carrier to be sunk by enemy fire.