After more than 70 years wreckage from a Avro Lancaster Bomber of the 617 Squadron RAF may have been found. It was actually a coincidence, that Dr. Klaus Offenberg, found a piece of metal at Huckberg.

Arises the question: To what plane do the parts belong which have been found almost 70 years after the war? According to Dr. Offenberg’s and with help of Uwe Benkel, they have identified that it is for certain the metal plate of a four-engined aircraft, a Lancaster type III, which crashed in 1943 near the small Bergeshöveder lock, which is a protected monument today. With eight-man crew, the Lancaster EE130 took off at 00:01 clock Coningsby in Lincolnshire in England in the night of 15 to 16 September 1943. On board were next to the 22-year-old pilot F/Lt. Ralph A.P. Allsebrook a flight engineer, navigator, bomb aimer, a radio operator and several turret gunners.

Joachim Eickhoff of the Ikarus-Gruppe knows remarkable details: The Lancaster of Bergeshövede belonged to the No. 617th Squadron of the Royal Air Force. This unit, which included eight aircraft, destroyed in May 1943 under the direction of Guy Gibson the Möhnetalsperre (Möhne Reservoir). For this this action a specially designed rolling bombs were used, which breached into the defense systems of the reservoir. After breaking the dam, a tidal wave tore at least 1,300 people dead. The Allied celebrated Guy Gibson as a hero and went to the U.S. to give lectures whilst the 617th Squadron flew further operations.

On the night of September 16, 1943, according to the information of Joachim Eickhoff, the Dortmund-Ems Canal in Ladbergen was the target. Similar to Gravenhorst there is a channel above the ground around and was therefore particularly vulnerable. Three of the eight aircraft were shot down of this squadron alone that night, reports Eickhoff: one of them in Steinbeck, all of the eight crew were members Killed in Action.

Also the Lancaster that crashed at the port did not count survivors, all were killed. The machine had previously been shot at and with great probability was hit by light anti-aircraft guns (Fla).This was only possible because the bombers flew low at an altitude of only 1500 meters. This tactic, which proved to be fatal for the crew, was temporarily applied, according to Eickhoff, to escape the German night fighters. The Lancaster III which was hit did probably lose some of its machine parts during its flight over Hörstel and Huckberg, one of which has now been found. 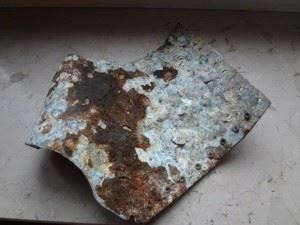 According to research by Dr. Klaus Offenberg, the pilot probably wanted to make an emergency landing. Offenburg reports: “The machine tore, with the rest of the wing, the roof off the Baumann’s house, hit with its cockpit a crane and crashed into the channel in flames.” The next day, the channel management began to recover the wreck. During the recovery they noted that probably due the collision with the crane, the crew was beheaded. The crew was initially buried as unknown in the Cemetery in Hörstel, after the war they were reburied in the British Military Cemetery of “Reichswald” near Kleve.

1 thought on “Wreckage find from a Lancaster after 70 Years”