World War I claims so many “firsts” that it’s a challenge to tally all of the ways in which the first global war altered the twentieth century. But an easy marker is the manner in which the presence of aviation made an imprint on combat. The skies had been part of the war zone since the eighteenth century when hot air balloons were employed for observation of the battle terrain, but it was the introduction of the airplanes that added a new dimension to the fighting. The terror came from above thanks to the daredevil pilots known as aces who wielded their airplanes and weapons with deadly accuracy.

Considering that it was 1903 when the Wright Brothers filed their patent for an airplane, the pace at which aviation accelerated matches the speed with which Europe marched to war. It wasn’t long, however, before the men in the airplanes would become the glamor boys of the war, as famous for their courage as they were for their willingness to face death. One name stands out in the annals of aviation warfare: Manfred von Richthofen, the “Red Baron” flying ace whose fame was so synonymous with flying supremacy that he was not only honored by his enemies when he fell, but has also been immortalized in a popular Christmas song featuring none other than the Charles Schultz cartoon canine, Snoopy.

The term “ace” originated with the French government but the other nations soon picked up the word to distinguish those pilots who had downed the enemy’s planes and pilots; for the French, a pilot had to achieve five kills in order to be termed an ace. The English required eight downed planes. Initially, a German pilot had to bring down eight planes to be described as an ace, but eventually that changed and the Germans required sixteen kills. That kind of math wasn’t a problem for Richthofen.

The venerated von Richthofen, who for a brief time served as a quartermaster, actually failed his pilot’s test the first time before passing in 1915. A month after joining a new fighter squadron in August, 1916, Von Richthofen earned his first kill. Eventually, the flying ace and his trademark Fokker DR-1 Dridecker Triplane soon dominated the martial skies; the Fokker could fly 100 miles an hour, a daunting speed for a war which still included cavalry soldiers fighting on horseback. The Fokker may not have been as swift as the Sopwith Triplane and Spad VIII models which were flown by the Allies, but with its rapid climb rate and maneuverability, von Richthofen wasn’t complaining. Von Richthofen called himself “the red fighter pilot” for his plane, which was painted bright red. That unmistakable color inspired the French to call him the Red Devil. His most enduring nickname, the Red Baron, would actually come after the war and historians aren’t sure of the derivation of the name. 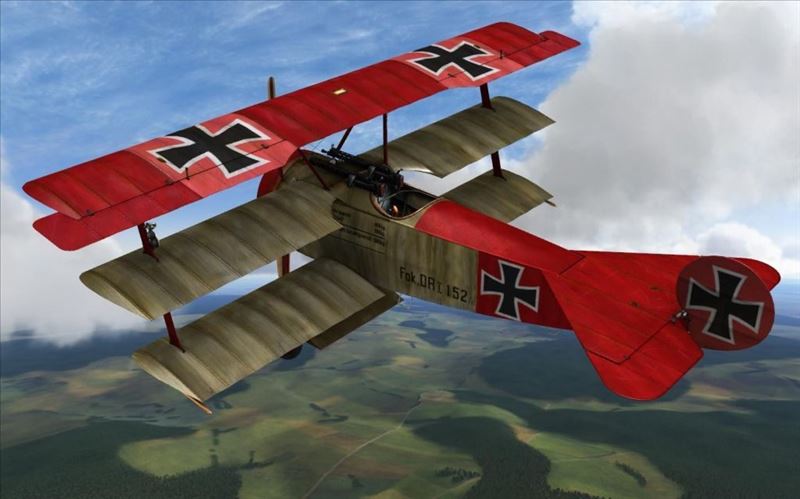 By 1917, von Richthofen commanded a squadron of prime German fighter pilots. The squadron was known as the Flying Circus for its ability to quickly move its tents and equipment wherever it was needed on the Western Front. This “best of the best” crew had a few tricks which were particularly effective. The wingmen had the task of distracting the target, which provided von Richthofen with the means to strike like a predator from above, besting the pilot at his mercy with relentless machine gun fire. Von Richthofen’s record of eighty kills surpasses the numbers for other World War I pilots and the ace knew how to immortalize himself. Silver cups, each marked with the date of the individual kill, were part of his trophy case. He also kept souvenirs, generally a piece of the plane that had fallen, to commemorate his feats.

The aces knew that they flew with the Grim Reaper at all times. Von Richthofen had dodged the deadly scythe numerous times, but his luck was drawing to a close. As all of his kills but one had downed British pilots, the British aimed to give death a hand.

On April 21, 1918, the skies were the setting for a terrific dogfight with thirty planes going at each other. One of the planes fell to ground held by Australian troops. The soldiers who ran to examine the airplane realized that the dead pilot was none other than the scourge of the skies, Manfred von Richthofen.

The British recognized the caliber of their foe and decided to honor him in death. His body was on view in a hanger as hundreds of British soldiers passed by to see the man who had owned the skies over the Western Front. For his funeral the following day, six Royal Air Force officers served as pallbearers. The casket was draped in flowers. British planes dropped photographs of the funeral over the aerodrome with a message from the British RAF to the German Flying Corps, informing them that Rittmeister Baron Manfred von Richthofen had been killed in aerial combat on April 21, 1918, and had been buried with full military honors.

It was originally believed that the victory belonged to Roy Brown, a captain with the Canadian forces. There’s also a belief that the kill belonged to the Australian gunners who fired the shot. No one is quite sure who deserves the credit for bringing down the top ace of World War I, but the legend of his feats has survived his passing.