The Imperial War Museum Collection features rare and fascinating original films preserved in the Museum’s archives. Many have never been released to the public before and are presented here, complete and uncut, for the very first time.

The Royal Air Force at War: The Unseen Films is a unique collection of three DVDs chronicling the R.A.F. in service during the Second World War and covering the period from 1940-1944. 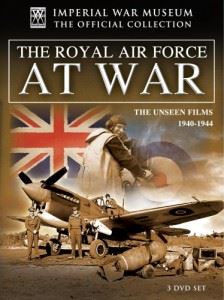 These carefully selected films cover a truly diverse range of subjects, from ditching procedures for Halifax bomber crews to a celebration of the newly introduced Lancaster, and from instructions for navigators on board Stirlings to the best way to

rescue crashed fighter pilots from their cockpits. There are film guides to preventing air accidents, fascinating behind-the-scenes accounts of servicing Wellington bombers and even a look at the R.A.F. Regiment.

Together, these 24 training and public information films provide a fascinating historical record of the Royal Air Force at the height of the war years.

Battle for the Skies: History of Royal Air Force 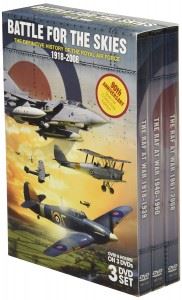 The Royal Air Force (RAF) is among the most gloried air forces in the history of air combat, and the oldest independent air force in the world. Made with the full support and cooperation of the Royal Air Force, Battle for the Skies is the definitive film history of the RAF from the early days of the Air Battalion and the Royal Flying Corps right up to its role in the Afghanistan and Iraqi wars. This 90th anniversary edition is one of the most detailed and visually compelling aviation series ever made.

Contents Include: Episode 1: Useless for the Purpose of War / Episode 2: Under Distant Skies / Episode 3: Fighter Command: A Vicious Sting / Episode 4: Bomber Command: Strike Hard, Strike Sure / Episode 5: The Sky s the Limit / Episode 6: By Air, By Sea / Episode 7: Supplies from the Sky. BONUS: The A Z of RAF Aircraft, Harrier Air-to-Air Sequence, The RAF on Display and The Battle of Britain. 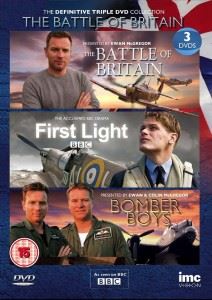 BATTLE OF BRITAIN There are few occasions in history when we can say that the actions of a few changed the destiny not just of a country – but of the world. The Battle of Britain is one of those moments. To mark the Anniversary of the Battle of Britain, arguably the most important event in modern British history, brothers Colin and Ewan McGregor present a ninety minute special for BBC1 leading us through the timeline of events during the height of the Battle. Colin is an R.A.F veteran of twenty years’ service – Ewan a hero of the big screen and fledgling pilot himself. Together they take us on a journey to honour the heroes of 1940 both on the ground and in the air, bringing the story of the Battle of Britain to a new generation. They will take to the skies over Southern England as Spitfires and Hurricanes once again fly over the White Cliffs of Dover. They discover the legacy of the Battle and reveal the inspiring personal stories of the few who were there and those still with us today. Using great aerial footage mixed with impressive historical archive film material this is truly the definitive programme on the Battle of Britain.

BOMBER BOYS Brothers Colin and Ewan McGregor follow up their documentary The Battle of Britain with a film exploring Bomber Command, a rarely-told story from the Second World War. The film focuses primarily on the men who fought and died in the skies above occupied Europe, with numerous examples of individual heroism and extraordinary collective spirit, and Colin learns to fly the key aircraft of the campaign: the Lancaster bomber. But this is also the story of a controversy that has lasted almost 70 years. The programme covers six years of wartime operations, and traces the obstacles and challenges that were overcome as the RAF developed and deployed the awesome fighting force that was Bomber Command.

FIRST LIGHT Thrown into the crucible of the most violent air war ever seen, a boy, barely out of school, is determined to fight for survival… Seventy years later, that same boy is still yearning to be free. At the age of nineteen, Geoffrey Boy Wellum was the youngest Spitfire pilot in the Battle of Britain. This is the dramatic story of the teenager who went to war with the Nazis and with the fear that threatened to engulf him. Combining Geoffrey Wellum s compelling first person testimony with intensely evocative action on the ground and in the air, First Light is a powerful drama that documents the universal stark horror experienced by those involved in battle? 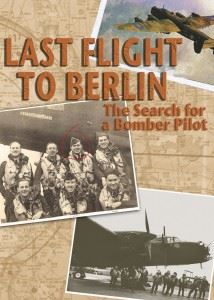 This very personal and moving film documents filmmaker Robert Linnell’s attempt to make sense of his father s death in combat during World War II. Linnell never knew his father. His father never knew him. Robert was but two months old when his father Lloyd Linnell, the pilot of a heavy bomber, was shot down in the night skies over Germany in 1944. Sixty years later Linnell, the son, sets off on a quest to honor the memory of his father, to document his war story on film, and to visit the very place where he died. Little did he know that his quest would end in a face-to-face meeting with the German fighter pilot who shot down his father s plane. I was two months old when my father died. Sixty years later I met the man who killed him. And so Robert Linnell s story begins.

Last Flight to Berlin follows the journey of Lloyd Martin Linnell from the day he enlisted in the Royal Canadian Air Force to his time spent with the Bomber Command doing battle in the night skies over Europe, to the fateful night in January, 1944, when his Halifax was shot down by a German nightfighter north of Berlin. But Linnell’s story is also the story of all the young men who flew into the darkness each night, knowing that they might not return. In the most horrific war in human history, their bravery and endurance was taken for granted. It was simply their duty. This very personal and poignant film captures first-hand accounts from eyewitnesses. Linnell eventually visits the crash site where the wreckage of the Halifax was hauled away and the crew buried in the village cemetery, and even meets Hauptmann Friedrich Tober, the fighter pilot who shot down his father s plane.

Red Tails: The Real Story Of The Tuskegee Airmen 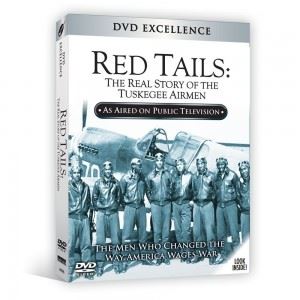 They were often treated as second class citizens, yet many (if not most), of the African American men who eventually joined the Tuskegee Institute volunteered to serve during World War II. Why?

Find out in Red Rails: The Real Story of the Tuskegee Airmen , as the film takes you directly to the Tuskegee training base as it exists today. And through the use of archival footage transports you to the battles where some of Americas bravest men fought in the air and on the ground. Hear from their family and friends, and see film and pictures from the war that capture the thrill and danger of air battle over Europe. 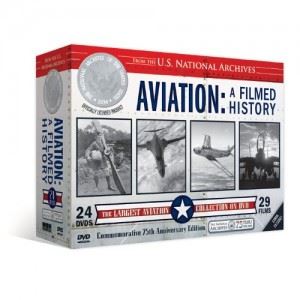 Classic Aviation
From short flights across a field to the screaming hypersonic edge of space, tour dramatic moments in the history of flight!
WWII: Air War
Dramatic footage of the U.S. Army Air Forces, Bomber Groups, Thunderbolts and more as they combat the Japanese, German and Russian military forces. Features bombing missions, intense take-offs and landings, please for war bonds, and the talented voices of Clark Gable, James Stewart and Lloyd Bridges.
Americas Fighting Jets
Feel the G forces as you streak through the sky in aerial combat. Featuring stunning, archival footage of planes, pilots and crews in action, this series offers a fascinating look into the intense world of F-15 Eagles, Stealth Fighters, Vipers and more!
Fighter Pilots
Ever dreamed of flying with the worlds hottest fighter aircraft? Experience the thrill of the F-14 Tomcat, F-16 Fighting Falcon, F-15 Eagle and the F/A Hornet from American skies to the Middle East.
Military Air Power
The flight action never stops! From the highs and lows of the U.S. Air Force, to the thrills of the Blue Angels, glimpse the world s most technologically advanced fighter aircraft and investigate the U.S. government s military stealth aircraft program.

Aircraft Of The Luftwaffe 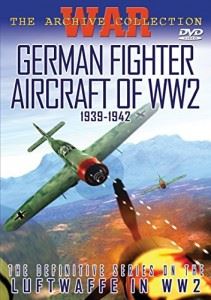 From the menacing gull-winged Stuka diver bomber, through the revolutionary jet-propelled fighers such as the Messerschmitt Me-262, to the transport workhorse of the German air-force, the Ju-52, every aspect of the Luftwaffe is documented in great detail. Using real-life documentary footage from the time, discover why the German air-force was an effective and very deadly threat to the Allied forces of World War II in this spectacular 8 DVD collection.