WWII: The Essential Collection (The World at War / Victory at Sea / The Century of Warfare) 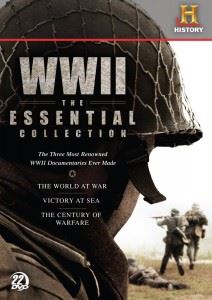 For the first time ever, the most influential documentaries on World War II are available in one comprehensive collection. Academy Award winner Laurence Olivier narrates the definitive history of World War II, THE WORLD AT WAR. Four years in the making, this 22-hour masterpiece explores virtually every facet of the war: planning, politics, battle, occupation and genocide. Featuring incisive interviews with key Allied and Axis leaders, including Albert Speer, Lord Mountbatten, Alger Hiss, Toshikazu Kase and many others, THE WORLD AT WAR is a devastating chronicle of battle.

The Emmy and Peabody Award-winning VICTORY AT SEA considered the most influential documentary in television history captures every major naval engagement of the war, from U-boat wolf packs to Iwo Jima and Okinawa. Featuring a score by Academy Award winning composer Richard Rogers, narrated by Leonard Graves and hosted by Peter Graves, VICTORY AT SEA, in the words of Harper’s Weekly, ‘created a new art form.’

THE CENTURY OF WARFARE frames WWII within the context of the war-torn 20th Century. From the precursors of World War I to the liberation of Kuwait, this encyclopedic documentary utilizes a vast archive of historical footage to explore every major engagement of 100 years of combat.

BONUS FEATURES: Over 12 Hours of Bonus Features, including: THE WORLD AT WAR. Bonus Documentaries: The Making of the Series, Secretary to Hitler, The Two Deaths of Adolf Hitler, Warrior, Hitler s Germany: The People’s Community 1933-1939, Hitler’s Germany: Total War 1939-1945, The Final Solution: Parts 1 and 2, and From War to Peace. Making the Series A 30th Anniversary Feature-Length Retrospective. Experiences of War Unseen Interviews from the Film Archives of the Imperial War Museum. The Making of THE WORLD AT WAR. Biographies. Gallery of Photos from the Imperial War Museum Collection. VICTORY AT SEA. Episode introductions with Peter Graves.

The War – A Film By Ken Burns and Lynn Novick

Creating epic documentaries about war is nothing new for Ken Burns, nor is the subject of the Second World War, which never ceases to be a popular subject of films and TV shows. Yet with The War, Burns has definitely succeeded in breaking new ground, exploring in depth the effect of the war on common Americans, and not just the soldiers of The Greatest Generation that fought it. As the narration says at the beginning, “The war affected people in every house, on every street in every town in America.” This is nothing less than an attempt to show how the war altered the lives of an entire nation through the portrayal of four individuals from four communities: Waterbury, Connecticut; Mobile, Alambama; Luverne, Minnesota; and Sacramento, California, that could represent any town in the country that went through the war. The result is another stunning achievement for Burns and co-director Lynn Novick. Together the filmmaking team succeeds in bringing the war home through the testimonies, letters, and footage of the people from these towns.

The storytelling is compelling–Burns and Novick manage to find the most vivid, intimate, and personal dimensions of a global catastrophe–and brought to life with exceptional voice work from marquee stars like Tom Hanks, Alan Arkin, and Samuel L. Jackson. Much of the footage is brilliantly restored; even the most die-hard History Channel buff will see clips here that they’ve never viewed before. Many old grainy family films look almost as clean and bright as if they were just shot using a modern camera with black-and-white film (keeping in mind that most of the footage was shot without sound, the audio effects work on The War is particularly impressive and should bring attention to the underappreciated work of the foley artist). It took Burns and Novick six years to make this seven-part, 15-hour film–not surprising, really, considering the miles of footage they must have accumulated in the course of their research–and the time and effort shows in the results. The DVD also includes a making-of featurette, deleted scenes, extensive commentaries, and more, in addition to a companion book, The War: An Intimate History. –Daniel Vancini

The Unknown War: WWII And The Epic Battles Of The Russian Front 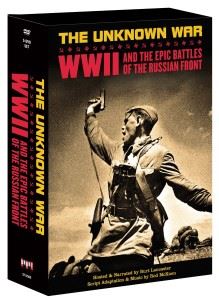 The Unknown War was a landmark television documentary series about the Soviet struggle against, and ultimate victory over, the Nazi war machine. Hosted and narrated by Academy Award winner Burt Lancaster, this sprawling series features rare and stunning footage recorded by Soviet camera crews on the front lines, most of it unseen since its original broadcast 30 years ago. From the June 22, 1941, invasion of the Soviet Union to the Russians’ victorious march into Berlin in 1945, the devastating battles in the air, at sea and on land are detailed with astonishing images. These stories of heroism, savagery and suffering from what the Russians call The Great Patriotic War will shed new light on the Red Army’s massive contribution to the Allies’ defeat of Hitler in World War II.

Special: Interview with Rod McKuen: Celebrated writer, performer and composer, Rod McKuen, who wrote the screenplay and composed the musical score for The Unknown War, takes you behind the making of this Soviet-American coproduction. Analysis by Willard Sunderland, associate professor of Russian history at the University of Cincinnati.

Auschwitz – Inside the Nazi State 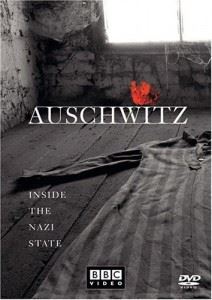 This six-part series tells the story of the Auschwitz Death Camp, site of the largest mass murder in the history of the world. Writer Laurence Rees and his team interviewed over 100 eyewitnesses, including former Nazi perpetrators who speak on the record for the first time. Their story is brought to life through the innovative use of archived footage, dramatic recreations of key moments, computer reconstructions based on recently discovered plans of the camp, and their extraordinary testimony. This will be the definitive television history of Auschwitz and the Nazi State.

More than any previous documentary about the Holocaust, Auschwitz: Inside the Nazi State reveals the inner workings of the Nazi implementation of Hitler’s infamous “final solution.” Drawing on the latest academic discoveries, this remarkable BBC series presents a wide-ranging, meticulously researched biography of the titular “killing factory” and its evolution into a highly efficient location for industrialized extermination of well over one million Jews, gypsies, and other so-called “mongrel races” between 1940 and 1945. From “Surprising Beginnings” to “Liberation & Revenge,” the six-chapter program chronicles the gradual process that escalated into the Holocaust, focusing its expansive European timeline on the detailed movements of preeminent (and highly corruptible) Holocaust engineers like Heinrich Himmler, Rudolf Höss, and “death doctor” Josef Mengele. Through painstakingly authentic reenactments of crucial meetings including the Wannsee Conference (where the “final solution” was secretly devised), we see and hear the Nazi thought processes, built on virulent hatred and bigotry, that “justified” mass murder on an unprecedented scale.

Subtle but exacting use of computer-animated effects allows three-dimensional exploration of newly discovered architectural plans and buildings long-ago destroyed, revealing the transformation of Auschwitz as World War II progressed. Along with rare archival footage, thorough documentation, and frank testimony from Holocaust survivors and Nazi perpetrators (not all of them penitent about their crimes), these programs make expert use of commanding narration by Oscar®-winning actress Linda Hunt, who brings depth and gravitas to a grim litany of sobering facts and figures. The result is an all-encompassing portrait of Auschwitz unlike anything seen before, masterfully written and produced by Laurence Rees with equal parts tenacity, intelligence, and integrity, informed by an overriding sense of moral outrage that is entirely appropriate to the history being examined. It’s a remarkable achievement, as important as Shoah as a definitive exploration of one of the darkest chapters in human history. –Jeff Shannon 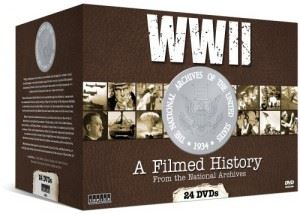 24 COMPLETE DVDS Since 1935, the National Archives has been responsible for the acquisition, preservation, and public dissemination of the permanent records of the United States government. Now, for the first time, select materials from this national resource have been assembled to bring you the largest collection of WWII history in one complete box set featuring everything from historical newsreel footage to documentary featurettes lensed and narrated by some of Hollywood’s greatest names. From America to Europe, from the air to the sea, experience a war that spanned the globe: Set #1: War in Europe Explores the Nazi ambition for world conquest, featuring historical pre-cursors, artillery and infantry attacks, the invasion Poland, and the horrific concentration camps. Set #2: War on the Homefront Takes you stateside to a time when gas rationing, food conservation, and the wartime efforts of civilian men and women occupied a nation. Features narration by James Stewart, Katherine Hepburn, and Humphrey Bogart, as wells as the acting talents of Susan Hayward, Alan Ladd, James Cagney, Margaret O’Brien and more. Set #3: War in the Pacific Dramatic footage of U.S. Navy, Marine, and Army forces as they combat the Japanese military. Features amphibious landings, Kamikaze air attacks, post-war events, the surrender of Japan, and the Academy Award®-winning documentary from acclaimed Hollywood director John Ford. Set #4: Why We Fight A thought-provoking collection exploring the wartime involvement of Russia, China, Italy, the United States, and Germany. Featuring the Oscar®-nominated documentary narrated by Walter Huston and footage featuring Edward R. Murrow and President Roosevelt. TOTAL RUN TIME: APPROXIMATELY 26 HOURS

Many milestones in our history are recalled only through the written word, the still image, or an interpretation long after the events occurred. The classic documentary films in this set provide more than what we think happened or a stylized movie treatment of the war they are the war. These chronicles of World War II were created through the efforts of cameramen who risked their lives to capture history. They tell the story of the Japanese buildup in the Pacific; the rise of Adolf Hitler; the horror of the concentration camps; the bombs and destruction; the Allied wins and losses; the peace; and the cost of war. Many of these documentaries chosen by our film archivists are the work of Hollywood s most gifted film-makers Frank Capra, John Ford, John Huston, Garson Kanin, and William Wyler enlisted to create films for military and civilian audiences. Their work inspired the war effort at home and trained and motivated our nation s war effort abroad. They brought the war into perspective for Americans, leaving little doubt about our allies, our enemies, and our objectives. Whether these films appeal to your interest in history, film, political science, or sociology, they will provide a first hand examination of the events of World War II. –Les Waffen, Chief, Motion Picture, Sound and Video Branch, National Archives and Records Administration.